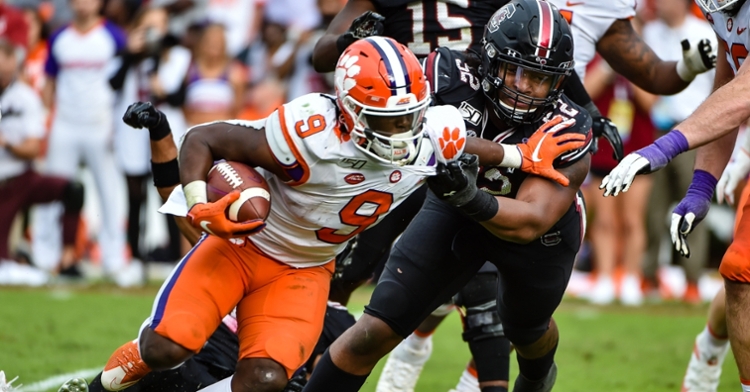 There is hope that Travis Etienne gets one more shot at the Gamecocks.

Don’t give up hope on the rivalry game between Clemson and South Carolina. There is growing sentiment across the region that both the ACC and the SEC will do whatever it takes to make sure that rivalry weekend happens despite the change in scheduling that is likely to occur.

However, one ESPN writer says the conferences are going to do whatever it takes to play those rivalry games.

“Particularly when it comes to the ACC and the SEC because there is so much crossover there,” Ryan McGee said on the Full Ride on SiriusXM Monday. “They desperately want to protect that last weekend of the season - Georgia and Georgia Tech, Florida and Florida State, Clemson and South Carolina, and Louisville and Kentucky. I was at the beach in North Carolina last week and this guy stopped me on the beach with big tears in his eyes and asked, 'Man, what are we going to do? What can we do to save Clemson and South Carolina?' But the point is that SEC and ACC have always worked together. Yes, there is a rivalry there and yes they compete for markets, but the reality is that when they have to work together, they do work together.”

McGee then said that ACC commissioner John Swofford is working behind the scenes with the SEC and Commissioner Greg Sankey.

“And John Swofford, who will be retiring a year from now, I have never believed he has received enough credit,” McGee said. “He is the silent assassin. He is working behind the scenes and has done that with the SEC for forever. And so a priority for them is to do everything they can to protect Louisville-Kentucky and to protect those cross-conference games and figure out a way to play those in addition to those non-conference games.”

McGee went on to say that he thinks the season will have a delayed start, which is the right decision for those conferences still waiting to announce plans.

“I have said all along that we would never start Labor Day weekend. I have always said that we will start the season on a delay and then probably not a 12-game schedule,” McGee said. “But they will save as many games as they can. But you use the phrase buying time and that is what they are doing. (SEC commissioner) Greg Sankey told us a few weeks ago that he has been told by multiple specialists at his universities that what you have to do right now is take as much time as you possibly can because the science changes and the numbers change. And hopefully there will be some sort of medicine at some point but you are only going to get there if you wait a little bit.”