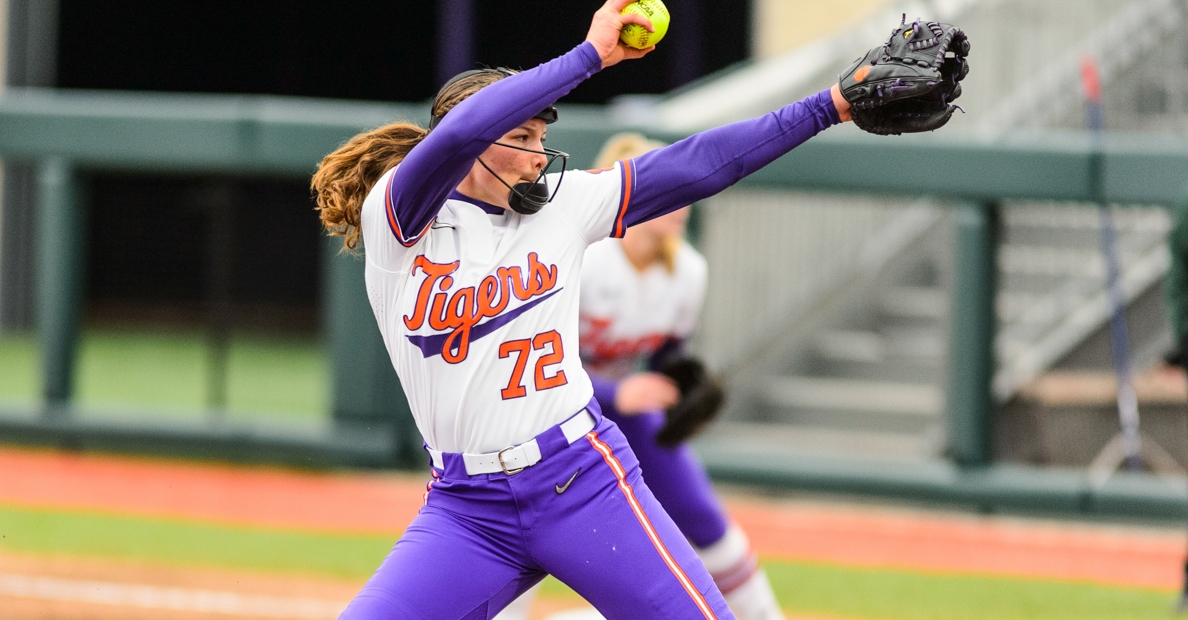 Cagle went the distance again and made an impact at the plate to start the series.

Cagle (8-6) recorded her eighth win of the season in the circle as the true freshman tossed her eighth complete game this year, allowing no earned runs on six hits.

Junior infielder Bailey Taylor finished the game 2-for-2 with three RBIs, and ripped her second home run of the season, a two-run shot, in bottom of the second with a full count and two outs. Redshirt senior infielder MK Bonamy also tied with Taylor for a game-high three RBIs, and freshman outfielder Alia Logoleo recorded her sixth extra-base hit of the season, driving in two runs of her own. Freshman infielder Hannah Goodwin finished 2-for-3 and scored two runs for the Tigers.

Clemson struck first in the contest in the bottom half of the second inning. Prior to Taylor’s homer, a one-out double from Goodwin was followed two batters later by a double off the wall by Logoleo, which scored Goodwin who was on second.

Clemson added to its 3-0 lead the next inning, using six singles and a walk to plate four runs and extend its lead to 7-0. Goodwin, Bonamy, Logoleo and Taylor all picked up RBIs in the inning.

Then, Bonamy doubled in the bottom half of the fourth inning, driving in two runs to extend the Tigers’ lead, 9-1.

Cagle sent down the Panthers in order in the top of the fifth as Clemson claimed victory in game one of the three game series.

The series continues at Clemson Softball Stadium on Saturday. First pitch for game No. 2 is slated for 1 p.m., and is scheduled to stream on ACCNX. To purchase tickets, visit ClemsonTigers.com.