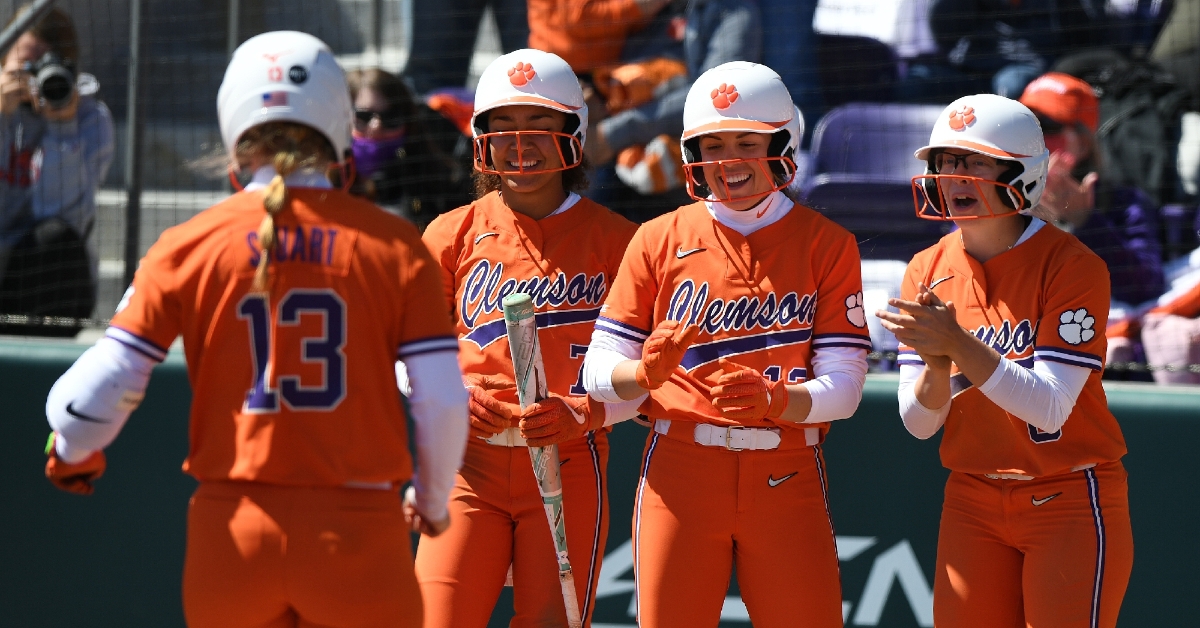 Clemson softball had plenty to celebrate at the plate on Friday. (ACC photo)

The duo of Millie Thompson and Valerie Cagle in the circle led the No. 18 Clemson softball team and Kyah Keller hit two home runs as the Tigers swept the Friday afternoon doubleheader against North Carolina inside of McWhorter Stadium, 6-1 and 12-1. Clemson improves to 25-4 overall and 17-4 in conference play. The 17 wins are the most of any ACC softball team, and the Tigers only trail Duke in conference winning percentage.

Thompson went the distance in the first game of the day, tossing a three-hitter (not allowing a hit until the sixth inning) and allowing no earned runs as well. It is the true freshman’s second complete game of the season and she improves to 4-1 overall.

Cagle recorded her 15th win of the season in game two of the afternoon, tossing 4.0 innings and striking out eight Tar Heels. Freshman Regan Spencer returned to the circle in the fifth inning in her first appearance since an injury, sending North Carolina down in order to secure the victory.

Keller finished game two 3-for-3 with four RBIs as well as her first two collegiate home runs of her career. Grace Mattimore also sent her first home run of the season over the left field fence in the first inning of game two, her first long ball in a Clemson uniform.

Abi Stuart had herself a day at the plate, 2-for-3 and driving in five runs. Stuart hit her fourth home run of the season in the first game of the day, a three-run, pinch hit shot to give Clemson the momentum back and extend its lead, 6-1.

“Very proud of the way we competed today and the way we showed our grit,” Clemson head coach John Rittman said after the game. “Looking forward to coming out tomorrow and hopefully putting another complete game together.”

The two teams will return to McWhorter Stadium Saturday, when they conclude the four-game ACC series at noon (ACCNX).

The Tigers jumped on the scoreboard early in the first game of the doubleheader, scoring two runs in the bottom of the first to open up their lead. Mattimore drew a walk with one out and moved over to second after a passed ball. Mrs. Do-it-all Cagle slapped a single back up the middle to score the first run of the game. Cagle scored two batters later when Ansley Gilstrap doubled down the right field line and drove in her 12th run of the season.

Clemson added another run to its lead in the fifth, opening up a 3-0 lead. After McKenzie Clark doubled to left field, Mattimore, who was batting in the two-hole on the day, roped a double to left field and scored Clark from second.

The Tar Heels recorded their first hit of the game in the sixth inning, breaking up Millie Thompson’s no-hitter bid. North Carolina used back-to-back singles to plate a run and cut into the Tiger lead, 3-1.

Stuart extended the Clemson lead in the bottom half of the inning, taking away any momentum the Tar Heels thought they had found. After a walk and a single, Rittman called to the bullpen for a pinch-hitter and Stuart launched her third home run of the season over the left field fence to increase the Tiger lead, 6-1.

North Carolina loaded the bases in the top of the seventh, but a great diving catch by Arielle Oda in right field and back-to-back strikeouts ended the threat and secured Thompson’s second-ever complete game.

The Tigers once again took to the scoreboard early, picking up a single run in the first inning off of Mattimore’s first home run in a Clemson uniform. Keller also joined the first home run party, recording her first career round trip around the bases in the second inning -- another solo shot -- to give the Tigers a 2-0 lead.

The Clemson offense exploded in the third inning, putting up six runs on six hits to increase its lead, 8-0. Stuart singled up the middle with one out to score two and up her RBI total to five on the afternoon. Clemson loaded the bases after the RBI single and Periera sent everyone home with her second triple of the season. JoJo Hyatt singled to the shortstop the next batter and drove in Pereira from third for the final run of the inning and Clemson took an 8-0 lead to the fourth.

North Carolina finally got to Cagle for a hit in the top of the fourth, stringing together two singles to score a run and cut into the Clemson lead, 8-1.

Keller sent her second ball of the game over the left field fence in the bottom half of the inning to answer the Tar Heels run. An error earlier in the inning allowed Cagle to score and the three-run shot from Keller put the Tigers up, 12-1.

After hitting a three-run jack in game No. 1, Stuart collects her fifth RBI of the day on a 2-RBI single up the middle to extend our lead to 4-0 in the third.

Ansley Gilstrap (@ansley_gilstrap) extends our lead to eight on this shot to left field ??

Her second homer of the game gives her four RBIs.