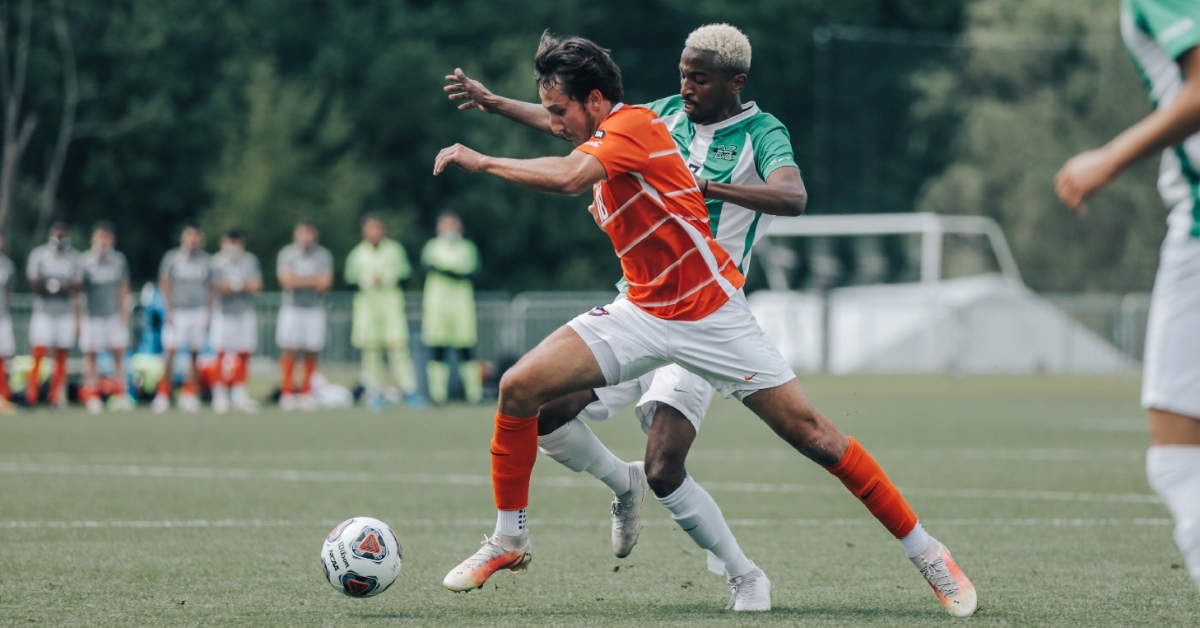 Clemson had 14 corners to Marshall's one, but the Tigers only produced one more shot on goal. (Clemson athletics photo)

The full 90 minutes of regulation and two 10-minute overtimes were not enough to decide the round of 16 game between No.1 Clemson and Marshall Thursday in Cary, North Carolina, as the Thundering Herd moved to the quarterfinals after defeating the Tigers in a penalty shootout, 7-6. The ACC Champions, both by the fall conference tournament and the spring automatic qualifier playoff, finish the season 14-4-2.

Both teams made four out of their first five penalty shots to send it into sudden death. Clemson's Quinn McNeil's shot was saved there, and the Thundering Herds’ Vitor Dias found the back of the net as Marshall advanced to the quarterfinals where they will take on Georgetown. This marks the second straight NCAA Tournament loss to come by the hands of a PK Shootout for Mike Noonan and the Tigers, after a 2019 home loss to Stanford.

“If you look back at it, we were the best team throughout a whole year season, during a pandemic,” Clemson head coach Mike Noonan said after the game. “We won two trophies and another playoff game here in the spring. We were seeded number one in the tournament, and we’re out on penalties. You look at that resume and in this type of year, there’s nothing to not be proud of.”

Clemson outshot and had more corner kicks than Marshall, taking 14 corners compared to only one for the Herd. Clemson had three shots on goal, while Marshall only found the net two times. 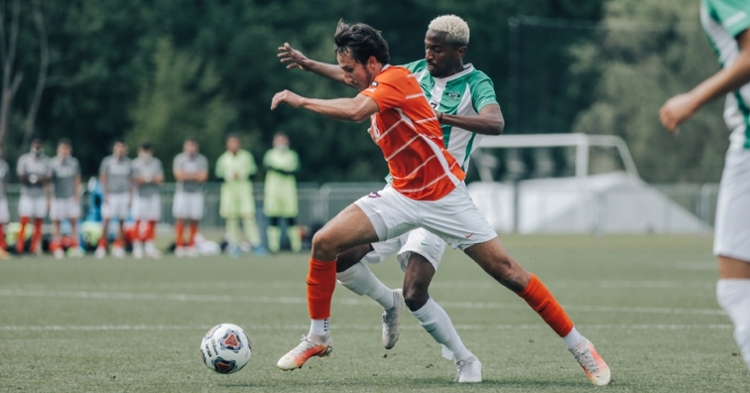 Clemson had 14 corners to Marshall's one, but the Tigers only produced one more shot on goal. (Clemson athletics photo)"

Marshall got on the scoreboard first in the 15th minute of the first half, marking the second game in a row during the tournament that the Tigers faced a first-half deficit. After Oskar Agren committed a foul on a Thundering Herd attacker in the Clemson defensive third of the field. The Marshall set piece worked to perfection as Max Scheider took the shot off the free kick, just inching it past George Marks' outstretched right arm.

The Tigers had their first scoring chance in the 26th minute, as James Brighton connected with a low rolling shot that forced the Marshall keeper to dive to his right and push it out to the side. The ensuing corner kick bended to the top of the box where Mohamed Seye took the third shot of the game for Clemson, but it was wide left.

Clemson got on the board in the 32nd minute, scoring off a set piece from a corner kick. The second corner of the game for the Tigers found the head of Agren who flicked it back post and found the foot of Justin Malou and as his shot hit the far post, Johnson was in the right place at the right time to put away his fifth goal of the season and level the game at one.

The teams entered the locker rooms at half knotted up at a goal a piece, with Clemson controlling much of the pace after the equalizing goal. The Tigers outshot the Thundering Herd 5-3 and two of Clemson's shots were on target while the only shot that found the goal for Marshall found the back of the net. The Tigers also outpaced the Thundering Herd 6-1 in corner attempts. The first half was hard-fought and physical as a combined 17 fouls were called and four total yellow cards were shown, two to both teams.

The first 30 minutes of the second half saw both teams battle for possession in the middle third of the field and still staying very physical as the referee made sure to keep both teams in check with his whistle. Clemson’s best chance came in the 82nd minute on the Tigers 10th corner but the header was pushed just wide to the left.

The final ten minutes of the contest was a stalemate and no team could get a footing on the attack. The Sweet Sixteen matchup would go to a golden goal overtime period.

Clemson had its first scoring chance of overtime just four minutes into the ten-minute period. A cross was headed by Hamady Diop towards the far post, but the Marshall keeper made his second save of the afternoon to keep the game-winning goal off the board. Neither team could find the back of the net and the game headed to golden-goal overtime period No. 2.

Marshall had a chance to net the game-winner in the 102nd minute, but back-to-back breakaway opportunities were wasted after both shots sailed past the right goal post. Neither team was able to take control on the attack and the game was decided in a penalty shootout to see who advanced to the quarterfinals.

Noonan decided to go with a brand new goalkeeper in the PK shootout, putting 6-foot-3 freshman Trevor Manion in net, and while he did make one save, it was not enough as Marshall moved on to the NCAA quarterfinals.

Callum Johnson slots home a loose ball in the box to bring the score back to 1-1! #ClemsonUnited ???? pic.twitter.com/GfblgZfxT3

An unforgettable season has come to an end for #ClemsonUnited ???? pic.twitter.com/Isovqx6oqn

A difficult end to a memorable ACC Championship season for #ClemsonUnited, which overcame so much as a team. Proud of the fight all season long! https://t.co/L3OfqdsmJD