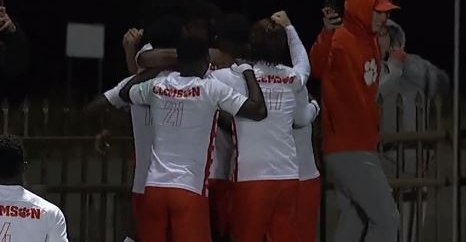 Clemson heads on to the Elite 8.

CLEMSON, S.C. -- Alvaro Gomez’s goal in the 89th minute of the Sweet Sixteen match was the difference in No. 8 Clemson’s 2-1 victory over No. 9 Kentucky (15-2-4) in the NCAA Tournament Round of 16 on Sunday night at Historic Riggs Field. After conceding late, Clemson responded and picked up a win that sent the Tigers (15-5-0) to their 16th all-time Elite Eight.

In a physical first half, Clemson hopped on top with a goal from Callum Johnson in the 14th minute. Ousmane Sylla attacked through the midfield and found the winger on an entry pass into the box, and Johnson's right-footed strike deflected off a Kentucky defender and into the net to put the Tigers up 1-0.

The Wildcats came within inches of an equalizer, but Luke Andrews's shot rolled just outside the post. Kentucky had another shot from outside the box that couldn't quite bend enough to hit the frame. Clemson was outshot 5-3 and both teams earned two corners in the first half.

The Clemson defense stifled Kentucky’s attack for the majority of the second half. It was not until late in the 85th minute when a cross found the head of Kentucky’s Lucca Rodrigues, who beat George Marks to his left to level the match at one apiece.

Head Coach Mike Noonan remarked on the ability of the team to respond late, “It is all about character and it is senior leadership… It has shown itself in so many different ways throughout the year.”

Just as it appeared the match was destined for overtime, Justin Malou saw a late-streaking Alvaro Gomez, whose perfectly weighted touch sprung him through on goal. He bested Kentucky’s keeper and sprinted for the corner flag to be mobbed by his teammates with just over a minute left in the match.

Time expired and Clemson moved on to its third Elite Eight in the last five seasons, and the fourth under Noonan, who could not say enough kind words about the Clemson faithful.

“You win that game because we are at home, and because the crowd was here. That is a very difficult game if it is on the road. Thank you to the Clemson faithful.”

Up next, the Tigers will head out to No. 1 Oregon St, with the date, time and broadcast information for the Elite Eight match to be announced.

ANOTHER LEGENDARY MOMENT FOR #ClemsonUnited!! YOUR TIGERS ARE HEADED TO THE ELITE 8!! pic.twitter.com/80ikjX3HB9