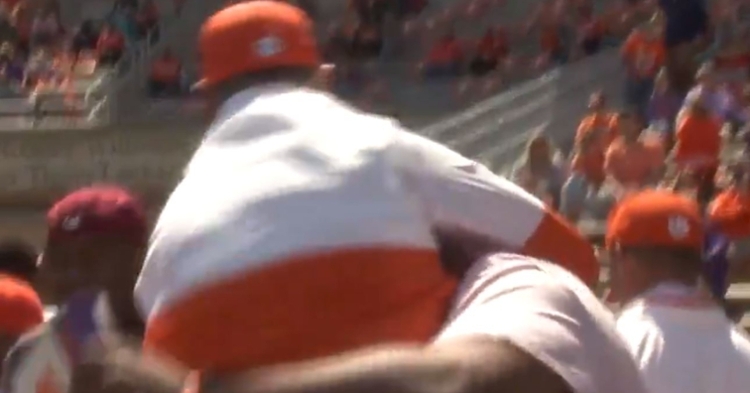 The annual Orange and White game was on Saturday afternoon with the White team winning 14-13 in a comeback effort.

Many of Clemson's former players were on hand on the sidelines to support the football team as they prepare for the upcoming 2021 season.

Dabo Swinney was able to spend a few special moments with several of the NFL players including Tee Higgins, Dexter Lawrence, Austin Bryant, Amari Rodgers, Clelin Ferrell, and others.

Swinney even got a chance to jump into Lawrence's arms in a warm embrace.

Check out the heartwarming video below, courtesy of Todd Summers.

The @ClemsonFB family is real.
Check out the way current #Clemson players & coaches react when they see @Cle_Missile, @teehiggins5, @llawrencesexy, @_austinbryant7, @arodgers_3 & others, including Dabo doing the Lambeau leap into the arms of Dexter Lawrence.
Great Stuff!@WSPA7 pic.twitter.com/NOqWK4iaLs