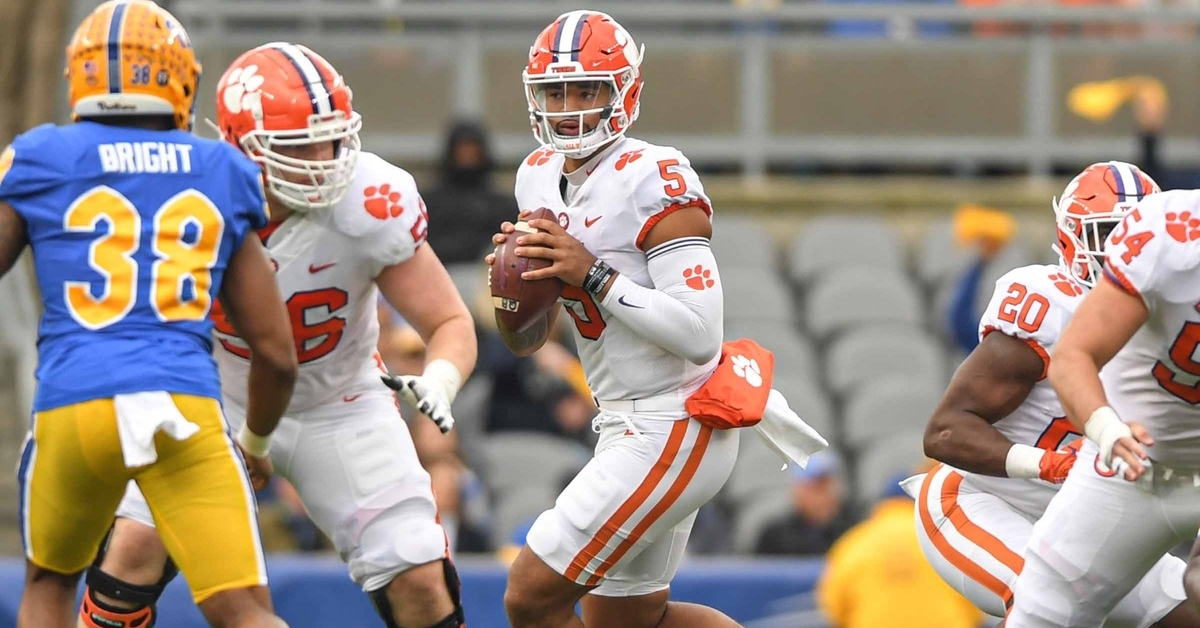 Clemson lost against a talented Pittsburgh squad 27-17 on Saturday and dropped the Tigers to 4-3 overall and 3-2 in the ACC.

This was the first loss by 10+ points for Clemson against an ACC opponent since 2014 versus Georgia Tech (53 games). It was also the fifth straight game with 21 or fewer points for the first time since 1994.

It was an eventful game as starting quarterback D.J. Uiagalelei was benched in the third quarter after a pick-six on a shovel pass that changed the course of the ballgame.

The Tigers also lost one of their captains Matt Bockhorst to a knee injury, as he likely will be out for some time.

Check out some of the reactions to the loss on Twitter:

Congrats to @CoachDuzzPittFB and @Pitt_FB for BIG WIN Vs Clemson today! #H2P

DJU & Dabo both used the analogy that every storm eventually runs out of rain.

That, of course, might well be the time Clemson’s house catches fire.

Pitt’s HC Pat Narduzzi told me he passed out gold sharpies to the team last night because this victory over Clemson would be a signature win ??

Since 2015, Clemson has lost only 5 games to ACC opponents. Pitt is only ACC team with 2 wins vs. Clemson in that span

The Clemson Tigers are 0-7 against the spread ?? pic.twitter.com/gR2XgO4tcO

Clemson hadn't lost more than one regular-season game since 2014.

The Tigers are now 4-3, with those three losses matching their total from the last three seasons combined. pic.twitter.com/Iz41l7sVz7

Clemson has now failed to crack 19 points in regulation in its first 6 FBS games of the year.

It's been a while since Clemson has struggled like this #FOXFacts pic.twitter.com/P382E5zxdy

Pitt gonna close out Clemson. They controlled the whole game. They're very much in the mix to win the ACC.

After 6 straight CFP trips, Clemson's playing for the Sun Bowl.

Celebration here at Heinz Field for #Pitt over #Clemson as the Panthers score 27 vs No. 2 defense in country on their way to 6-1, 3-0 in ACC: pic.twitter.com/qFANHy1VaP

Pitt doing to Clemson what Clemson used to do to other teams. Imposing its will.

Clemson fans: it's just so hard staying invested in a team this horrible, yknow?

Kenny Pickett is the 3rd ACC QB over the last 15 seasons to have multiple pass TD in each of his first 7 games of a season, joining Sam Howell (in 2019) and Jameis Winston (in 2013) via @ESPNStatsInfo

Just noticed that Justin Foster is also not dressed. In addition to Bresee, the WRs, no Foster, no Galloway, Bockhorst looks long-term, lot of OL out. This team is a MASH unit

Maybe Clemson's offensive woes go beyond who's under center... pic.twitter.com/DGDGH14gdI

Clemson had everything in front of them still after losing by a touchdown to Georgia, and this team got worse each week. Mind boggling

Let’s go PHOMMACHANH, I’ve said it over and over, I just want a CLEMSON win. It’s a team sport and we support who ever is on the field. #AllIn #GoTigers

Pitt is getting its licks in on Clemson today.

DJ Uiagalelei has been benched against Pittsburgh.

Back up Taisun Phommachanh is now in for @ClemsonFB. ?? pic.twitter.com/7PdSrs7Gae

Clemson’s offense being this bad is one of the most puzzling storylines of this season https://t.co/vS1Reeu8DX

Per StatBroadcast, Clemson was 1-11 on deep passing attempts (15y+)

You must have a name that’s impossible to pronounce to play QB for Clemson this year pic.twitter.com/KKCXusJUgF