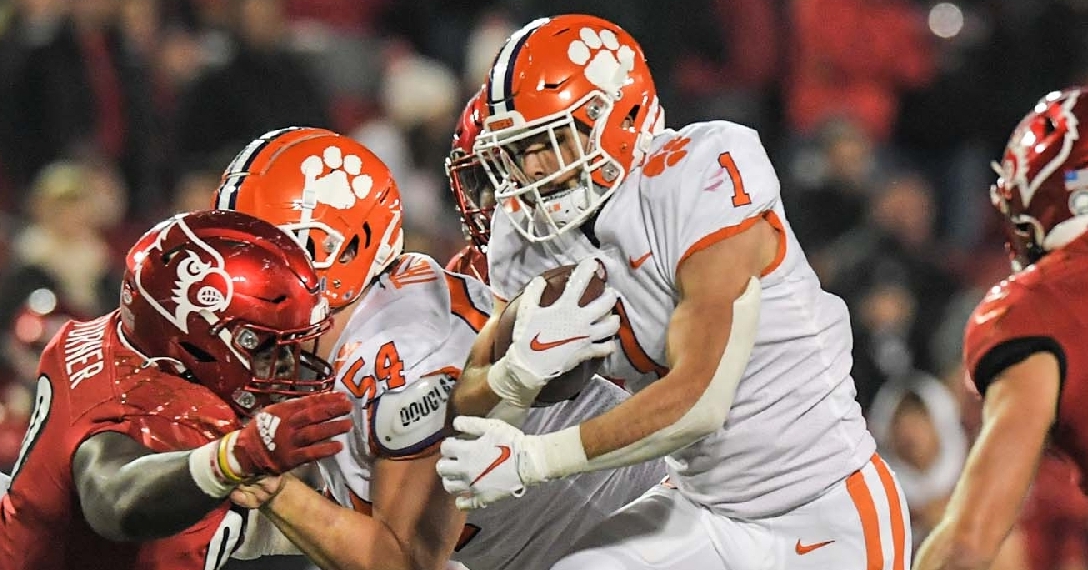 Clemson is now 4-2 in one-possession games (decided by eight or fewer points) this season.

Clemson has won 31 of its last 38 one-possession games since 2011, the highest winning percentage in the country in one-score games in that span (.816).

Clemson pushed its all-time record against Louisville to 7-0.

Clemson evened its record in true road games this season at 2-2.

Clemson improved to 29-4 in true road games since 2015. Clemson has earned victories in 45 of its last 54 games away from home overall.

Clemson improved to 57-5 against ACC opponents (including postseason play) since the start of the 2015 season.

Clemson defeated an ACC Atlantic Division opponent for the 41st time in its last 43 opportunities. Those figures include games against traditional Atlantic opponents in a divisionless season in 2020.

Clemson improved to 73-6 in regular season play since the start of the 2015 season. All six of Clemson's regular season losses in that span have been decided by a final margin of 10 or fewer points.

Clemson improved to 114-13 against AP-unranked teams under Dabo Swinney. The win makes Clemson 91-3 against unranked teams since the start of the 2012 season.

Dabo Swinney earned his 146th career win in his 14th season (including an interim stint in 2008) to pass Mark Richt (145) for sole possession of the fifth-most wins through the first 15 seasons of a coaching career in FBS history.

Clemson improved to 112-2 when totaling more first downs than its opponent since 2011, recording 21 first downs to Louisville’s 17.

Clemson remains undefeated on ACC Network broadcasts since appearing in the channel's first live game broadcast in the 2019 season opener. Clemson went 4-0 on ACCN in 2019, 3-0 on ACCN in 2020 and is now 3-0 on the network this season.

Clemson overcame a 24-17 deficit after three quarters for the win. Including overcoming a fourth-quarter deficit against Florida State last week, Clemson has now won back-to-back games with fourth-quarter comebacks for the first time in the Dabo Swinney era.

Uiagalelei gave Clemson the late lead — its first of the game — on an eight-yard touchdown run with 4:12 remaining. The rushing touchdown was his career-high-tying fourth of the season.

Clemson scored on its opening drive, a three-play, 75-yard drive that concluded with a 46-yard touchdown pass from Uiagalelei to wide receiver Beaux Collins.

The touchdown reception was the first of Collins’ collegiate career but not the first of his lifetime from Uiagalelei. The two were teammates at St. John Bosco High School in California.

Collins finished with a career-high 104 yards on six receptions.

The 100-yard receiving game was the first of Collins’ career and the first by a Clemson true freshman since Justyn Ross recorded 153 yards against Alabama in the College Football Playoff National Championship Game to end the 2018 season.

Clemson evened the score, 17-17, with 18 seconds remaining in the first half on an eight-yard touchdown pass from Uiagalelei to tight end Davis Allen.

Allen has now caught a touchdown in back-to-back games for the first time since a three-game streak against Miami (Fla.), Georgia Tech and Syracuse last season.

Quarterback Taisun Phommachanh recorded a career-long 26-yard run on his first snap of the game.

During the game, Ross (2,340) passed Derrick Hamilton (2,312) for 10th on Clemson's leaderboard for career receiving yards.

Simpson recorded a sack upon forcing Louisville quarterback Malik Cunningham into an intentional grounding in the second quarter. Simpson has now recorded a sack in three consecutive games for the first time in his career.

Simpson added his second sack on a third-down stop in the fourth quarter with Clemson trailing by four.

Simpson was also credited with a career-high 10 tackles, surpassing his eight earlier in the season at NC State.

Safety Andrew Mukuba recorded his first career sack on a fourth-down stop to give Clemson the ball back with a three-point lead and 2:40 remaining.

Linebacker James Skalski was credited with a sack on Louisville’s final play, Clemson’s fourth sack of the contest.

Clemson has now recorded at least four sacks against consecutive opponents for the first time since a four-game streak across the final two games of 2019 and first two games of 2020.

Running back Will Shipley recorded a 75-yard kickoff return in the third quarter. It was the longest kickoff return by Clemson since a 77-yard return by Artavis Scott against Louisville in 2016. Scott now serves as an offensive graduate assistant on Clemson’s staff.

Spiers, Swinney and linebacker James Skalski each played in their 65th career games to extend their school record for most career games played.

Clemson allowed a touchdown on Louisville’s first possession. It snapped a streak of eight straight games to open a season in which Clemson had not allowed a score on an opponent’s first drive of the game.

Conversely, Clemson scored an opening-drive touchdown for the second time this season and the first time since Sept. 11 vs. South Carolina State.

The game was tied 17-17 at halftime, only the 10th time under Head Coach Dabo Swinney that the Tigers have been tied after two quarters. Clemson improved to 7-3 under Swinney in games tied at halftime, earning its first such win since 2019 at North Carolina.

Clemson played back-to-back games in the series in Louisville for the first time. After most recently playing in Louisville in 2019, a scheduled game between the two teams at Clemson in 2020 was removed when the ACC instituted its pandemic-adjusted schedule for that season.