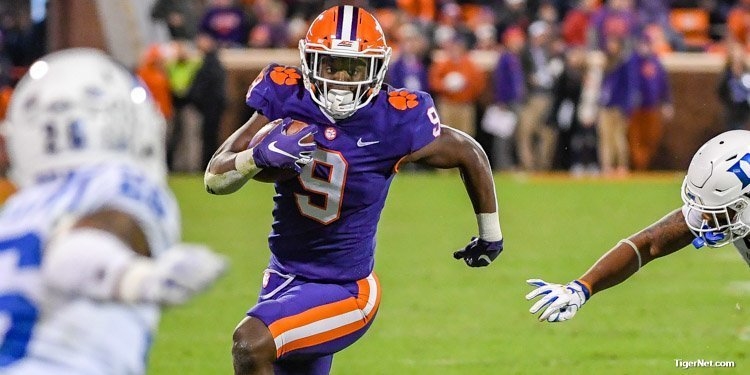 Drama hasn’t exactly been a fixture in this year’s College Football Playoff rankings and that remained the case at the top this week.

There was no movement in the top-6 for a third-straight week with Alabama at No. 1 then Clemson, Notre Dame, Michigan, Georgia and Oklahoma.

Clemson has made the CFP top-four in 22-straight rankings now. ACC Championship opponent Pittsburgh debuted at No. 24 this week. The Tigers have wins over two teams currently ranked in the CFP Top 25 with Syracuse (20) and Texas A&M (22)

Going into rivalry week and championship games to come after that, Clemson leads the trio of undefeateds in projected Playoff chances (96) per ESPN’s Playoff Predictor, followed by Notre Dame (91) and Alabama (80).

The next-four contenders all have big games ahead with one-loss Michigan (42) and Ohio State (26) playing Saturday in Columbus, Ohio to stay in the hunt, Georgia (39) needing wins over Georgia Tech and Alabama to make the CFP and Oklahoma (21) possibly needing some chaos in front of them to find a way in the top-four.

Updated with the new rankings, ESPN’s FiveThirtyEight gives Michigan the nod for the final spot (61) if all but Alabama win out in the top-six, with Oklahoma next (54)) and then Alabama (15; 14 percent if Washington State also wins out).

Clemson moved ahead of Alabama in ESPN’s Football Power Index this week, returning to the top spot for the first time since its preseason projection. The Tigers are rated with the No. 1-rated defense and the No. 6 offense in ESPN’s efficiency metrics. Both the Playoff Predictor and FiveThirtyEight project Clemson as the most likely national champion at this point.

Rob Mullens said the committee did talk about whether Bama and Clemson should flip.

Mullens said the committee sees Bama and Clemson as more complete teams than ND right now, with "strengths on both sides of the ball."