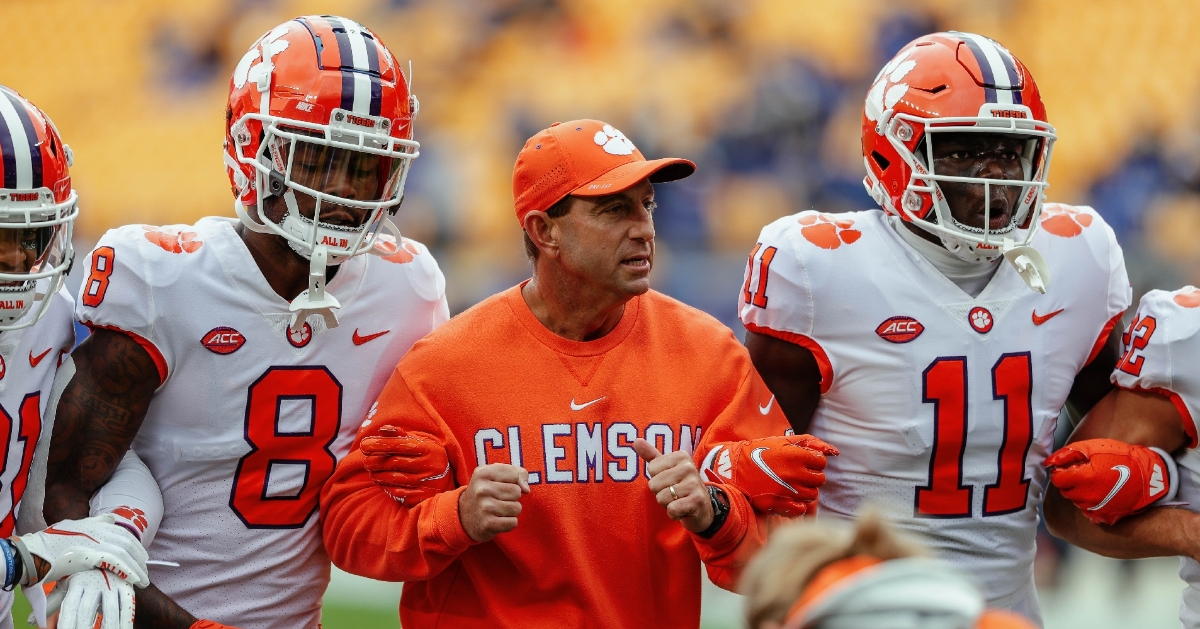 Clemson coach Dabo Swinney appeared on Clemson's Flagship station with The Roar FM and gave an impassioned wrap to an interview.

The Tigers have dropped from as high as No. 2 nationally to unranked now going into the 3:30 p.m. broadcast start on ESPN with Florida State in Memorial Stadium.

"I want everybody to just relax," said Swinney on The Roar's Out of Bounds Show Wednesday afternoon. "I want everybody to keep some faith. I want to challenge everyone to really kinda check their perspective. If you don't believe in this coaching staff and this team and the culture we have at Clemson after what everybody has lived through over the last whatever then you probably didn't believe in the first place. We have -- not a good -- but a great group of young men that fight their butt off. We've stunk on offense and there's no question about that and we know -- we haven't forgotten football -- we know the issues. And we're going to get better and we're getting better.

"And as bad as we've been, we're still a gnat's hair from being undefeated. And that's the reality. And here's the other thing, we've got a great group of young people that are learning a lot of great lessons. And we've got a long way to go this year. And we're going to fight our butt off as a staff and a team to finish the best possible way we can.

"But if nothing else comes from this, I hope that it's a reset and an appreciation of how hard it is to win. It is not easy to win. I think everybody can get numb and take it for granted. Ten 10-plus win seasons in a row is the third-longest streak in the history of college football. History - you know why? Because it's hard to win and especially to win consistently. We may not make a seventh Playoff in a row but we made six in a row and nobody's ever done that. Not Alabama. Not anybody. You know why? Because it's hard to do that. It's really, really hard. We've got six wins in the Playoff. Alabama has eight. We've beaten the best of the best on the biggest stage. Tony Elliott has not forgotten football. He's one of the smartest, brightest people on the planet."

Swinney says the culture around Clemson has changed quite a bit since he took over.

"When I got the job, Clemson was so frickin divided," said Swinney. "Pathetically divided. Alright? This is not a time for division. This is a time to roll your frickin sleeves up and get behind this team and get behind this staff and have some dadgum faith and some trust. I'm the same guy that's been a part of two national championships. Tony Elliott is the same guy that has in three national championship (games) with Alabama -- has won two of them and the one we lost was 45-40 with almost 600 yards. We haven't forgotten football, but football can be a very challenging thing at times. You have development. You have maturity. You have injuries. You have limitations from time to time for different reasons. Nobody is entitled to win. Nobody is entitled to it and you have to earn that and I hope there can be a reset and an appreciation for how hard it is to win and especially to win consistently because it's not easy. It's not.

"But I can guarantee you this -- Clemson ain't going anywhere. What an unbelievable journey it's been the last 13 years. In '09, there weren't three people outside of my mom, my wife and Koolaid Jim (a frequent caller to radio shows) -- wherever he is -- who thought we could go on a run like we have over the last 13 years. And over these last 13 years, we've had some challenging moments."

"He (Catanzaro) left here as the school's all-time scoring leader and that's what's going to happen with DJ Uiagalelei," Swinney said. "Alright? I'm just going to tell you right now. DJ is going to be an unbelievable quarterback. He's going to be a great quarterback. We've got to be better around him. There's been a lot of things and it's been a weird year but we've got a lot of fight. We've got five weeks to go be the very best we can be. Alright? This just like when we were 2-3 in '09 and we played for the (ACC) Championship. 1-2 in '14 and went 10-3 and won 40-6 against Oklahoma. Alright? Gave up 70 in the Orange Bowl in 2011 and boy that stunk and came back the next year and won against LSU the next year with two seconds on the clock...You know why? Because we kept working and we didn't flinch because of all the bullcrap.

"And so, this is a time where everybody needs to take a deep freaking breath, OK? And understand who we are -- and quit listening and worrying about what other people say. We are Clemson. We are Clemson. This is one season in the midst of an unbelievable journey. And we've got a long way to go. We've got a long way to go this year, and you best believe, Clemson isn't going nowhere. We're going to keep doing it the Clemson way. Building great men through this game of football. That's what we're going to do and we're going to win at the highest level as consistently as anybody has ever won in college football. That's what we've done and that's what we're going to keep doing. Quit worrying about what somebody says who don't know anything about who we are as people or who we are as a program and certainly don't know who these kids are. We have a great group of young men who fight every day and there's nobody who hurts more than this staff of where we are."

Swinney also took exception to how his team can be built up preseason and before games at times.

"And you know what? How about we give the opponent some credit too?" Swinney said. "The media is a part of this because coach (Nick) Saban talks about rat poison -- well all people read and see is that Clemson's just going to roll everybody...'They're just going to play Georgia and they're either going to be 11-1 or 12-0.' You know everybody else hears that too and everybody's got coaches and everybody's got players. And it's not easy to win. You don't just come to Clemson and show up and win. So, man, there is a lot of positives that are going to come from this season. A lot of positives and great things. All I can tell you is I'm 51, and I'm just getting going. I've got a long way to go in college football. A long way to go. And I'm a better coach today and our staff is a better staff than we were in '09. And this roster and the culture that we have and the track record is undeniable. So, I just want to say that."

#Clemson HC Dabo Swinney took part in a Breast Cancer awareness event today, & gave a fiery response in an interview with @1055TheROAR on criticism of his program. It went 8 min, here’s a couple snippets “I can guarantee you this, Clemson ain’t going anywhere.” @foxcarolinanews pic.twitter.com/aKBswIYq7x