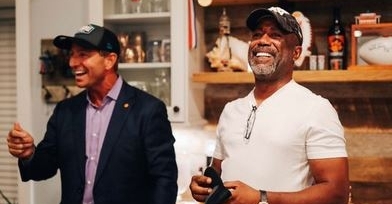 Rucker is publicly adamant about his love of the Gamecocks so it didn't make sense for fans that he was hanging out with a sea of Clemson folks.

However, Rucker is a partner in the MGC Sports marketing agency that recently signed Lawrence.

Basically, Rucker was there to support their highest-profile client on his special day. Case solved.

Other Clemson players that are represented by MGC include Adam Humphries, Bradley Pinion, Hunter Renfrow, John Simpson, and Tyler Shatley.