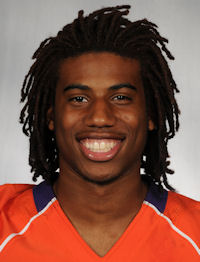 Bryce McNeal
Wide Receiver
#11 6-1, 180
Minneapolis, MN
View Full Profile , who is scheduled to graduate from Clemson later this week, was denied admission to UCONN and will now play football at Louisville. McNeal graduated from Clemson in three years, but according to the theday.com in Connecticut his GPA fell below the 2.7 required at UCONN. Since he is a graduate, McNeal will not have to sit a year as most transfers do.