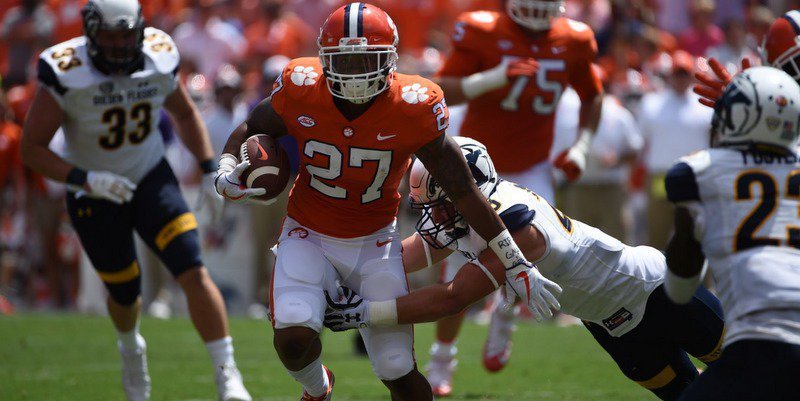 Fuller says Clemson "will always hold a special place" in his heart.

Three Clemson players set to transfer sent out a message of thanks to Clemson on social media Thursday afternoon.

“My time here at Clemson University has been amazing & leaving will be bittersweet," Fuller wrote. “I’ve made a lot of great memories here both on & off the field. It has been an honor & and a privilege to play the game I love under Dabo Swinney & coach (Tony) Elliott & the time I spent here at Clemson has helped me become the man I am today. I’ve learned that win or lose there is a lesson in every situation. That is something I will take with me everywhere I go. I have accomplished more than I could imagine during my time at Clemson as both a player and as a student.

“However, there are many more lessons for me to learn and I have decided to further my education and athletic career elsewhere. I want to say thank you to everyone who contributed to my achievements, as well as those who watched me achieve them. I will always be a Tiger at heart. I would like to thank God along with coach Swinney for giving me an opportunity to play the sport that I love for the renowned Clemson University. Over the past three years I have not only grown as an athlete but also as a person. I am blessed to have been apart of an amazing program whose morals and values align with those of my own.

“I will forever cherish the memories that were made here with my teammates, coaching staff and the entire Clemson family. I would not have been able to grow into the young man or player that I am today without the overwhelming support from all of you. Orange and purple will always hold a special place in my heart! #Go Tigers.”

Bell, a rising junior, played in nine games last season with one catch for eight yards.

“(Clemson is) forever my home! The past 3 years have made me a better young man on the field and more importantly off the field,” Bell said. “To my brothers, I love each and every one of y’all. We will always be brothers. To the staff, thank you for pouring your heart into a child from Decatur, Georgia and giving him an opportunity to play and get an education at the highest level. A special thanks to coach Swinney for believing in me when others didn’t. Graduating from Clemson University in May will be a dream come true and an accomplishment that nobody can take from me...Thank you for all the support.”

Johnson, a rising junior, announced his transfer earlier in the week, but he also had a few more words to say about his time as a Tiger. He played 129 snaps over 11 games in two seasons, totaling 14 tackles, three TFL, two sacks and a QB pressure.

“After a long and thoughtful process with a lot of prayer, I have decided to transfer to another institution for my two years of remaining eligibility," Johnson said. "I would like to first thank God for presenting me with the opportunity. I also want to thank coach Swinney, the coaching staff, the fans and the family I have made along the way.”

"I want to thank Coach Swinney, the coaching staff, the fans & the family I have made along the way."

Thank you for being a great ambassador for the #Clemson football program, Sterling! Best of luck!

"It has been an honor & a privilege to play the game I love under Coach Swinney & Coach Elliott & the time I spent here at #Clemson has helped me become the man I am today."