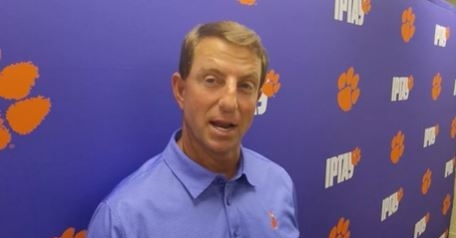 Adam Randall will be in fall camp with the team despite a serious knee injury suffered this spring.

Clemson coach Dabo Swinney said he liked the report he received on Wednesday from his medical staff regarding injury recovery within his team.

One in particular who is expected to play a role in fall camp come August is freshman Adam Randall, who tore his ACL during spring practice.

"Adam, he'll be in practice and rolling," Swinney said ahead of a booster event in Greenwood, "but when they fully let him go, whenever that day is, I don't know -- he'll be rolling in camp and participating. Probably in a limited -- probably in a green jersey. But he'll be there. It's not like he's a longterm guy who won't be in our 110 (players that can be in fall camp)."

Swinney says the entire team is in a good place there as well.

"We've got a couple walk-on guys who may not be in the 110 because of injuries and it might be later on when they get back. All scholarship guys are in a good spot and all really, really good," Swinney said. "I like the report I got this morning from the medical staff as far as where everyone is. Hopefully we can have the type of summer we need to have."