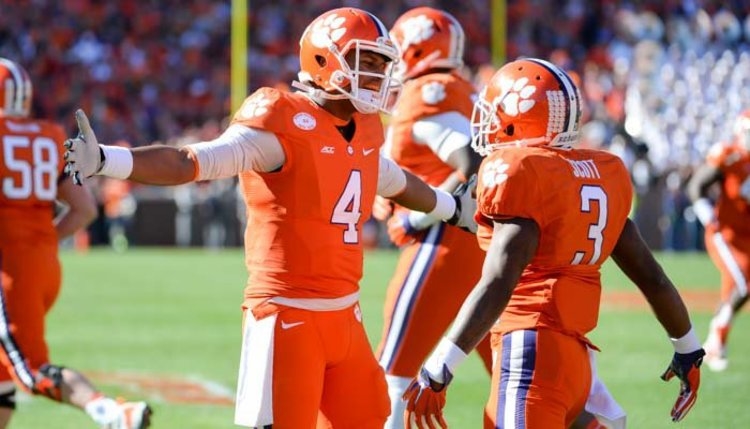 *Clemson has now defeated the #5 (Ohio State) and #6 (Oklahoma) winningest programs in the history of college football in bowl games to end the last two seasons in bowl games.

*This was the second largest margin of defeat for Oklahoma in a bowl game. The only one larger is a 36-point victory by Southern California (55-19) in the 2005 Orange Bowl.

*Clemson has won three consecutive bowl games, all against programs who have won the National Championship since 2000. LSU to end 2012, Ohio State to end 2013 and Oklahoma this year. The coaches they defeated, Les Miles, Urban Meyer and Bob Stoops also won national championships since 2000.

*Clemson’s senior class ends its career with a school record 42 wins, nine against teams who were ranked in the top 25 in at least the of the major polls entering the game.. Tonight’s win tied the record for wins over ranked teams by one class. Last year’s senior class also had nine top 25 wins.

*Clemson joins Alabama, Northern Illinois and Oregon as the only schools with at least 10 wins each of the last four years.

*This is the first time Clemson has won three straight bowl games since the 1986-90 era when the Tigers won five in a row. The fourth win in that streak was against Oklahoma in the same Orlando Citrus Bowl Stadium.

*Clemson closes the season with nine wins in its last 10 games for the first time since 2012, but for only the eighth time in school history. It is only the second time Clemson has done it in the last 24 years.

*Clemson closes the season on a three-game winning streak for the first time since the 2005 season when the Tigers won their last four.

*Clemson had noteworthy plays on offense and defense to start the game. On defense, Clemson’s Grady Jarrett

Ben Boulware
So. Outside Linebacker
#10 5-11, 235
Anderson, SC
View Full Profile combined to stop Oklahoma running back Samaje Perine for a one-yard loss. It was the 123rd tackle for loss of the year and established a Clemson season record. Last year’s team had the previous best with 122.

Artavis Scott
Fr. Wide Receiver
#3 5-11, 190
Oldsmar, FL
View Full Profile for a 65-yard touchdown pass. It was the fifth time this year Clemson scored on its first drive of the game, the first time Clemson had done it on the first play of the game.

*Clemson finished with nine tackles for loss and an FBS best 131 for the season.

*The 65-yard touchdown pass from Cole Stoudt to Artavis Scott on the first play of the game was the first play call by Clemson co-offensive coordinator Tony Elliott, who was working from the press box.

*The result of the play resembled the first play made by former Hall of Fame Coach Frank Howard, whose first call as Clemson head coach in 1940 against Presbyterian resulted in an 18-yard touchdown run by George Floyd.

*Clemson won the first quarter 17-0. It was the largest positive scoring margin for Clemson in a quarter in a bowl game since the third period of 2001 Humanitarian Bowl when Clemson outscored Louisiana Tech 28-0 in Boise, Idaho.

*Clemson has now scored exactly 40 points in each of its last two bowl games, 40-6 tonight and 40-35 last year against Ohio State in the Orange Bowl victory. The 40 points tonight are tied for the second most in a bowl game in Clemson history.

*Clemson forced five turnovers tonight, the most it has forced in the 39 games Brent Venables has served as Clemson defensive coordinator. It was the most by any Clemson defense since forcing six against North Carolina in 2011.

*Venables has now been an assistant coach at an FBS school 19 years and the teams he has coached have won at least 10 games, 15 of those 19 years.

*Clemson has allowed Oklahoma to score just 12 points and score just one touchdown in eight quarters of football in the Orlando Citrus Bowl Stadium. They came into those games averaging at least 30 points per game each season, including 38 a game this year.

*ACC Teams have just three total wins over Oklahoma over the years. Clemson (2-0) has two of the three. Miami is the only other ACC team beat Oklahoma as a member of the ACC (2009).

*Cole Stoudt became just the third Clemson quarterback to throw for 300 yards in a bowl game. The others are Tajh Boyd

*Cole Stoudt threw for a career high 319 yards this evening. It is the only game in his career he threw for at least 300 yards against an FBS school.

*Stoudt accounted for four touchdowns tonight, three passing and one rushing. He joins Tajh Boyd and Woody Dantzler as the only Clemson quarterbacks to account for at least four touchdowns in a bowl game.

Adam Humphries
Sr. Wide Receiver
#13 5-11, 193
Spartanburg, SC
View Full Profile started at wide receiver for Clemson tonight. It was his 53rd career game, the most in school history at the wide receiver position.

Robert Smith
Sr. Safety
#27 5-11, 211
St. George, SC
View Full Profile all played in their 53rd games for Clemson tonight. They have never missed a game in their careers. Williams played his final game as a Tiger on his birthday this evening.

*Artavis Scott scored on a 65-yard touchdown pass from Cole Stoudt on the first play of the game. It was his fifth play of at least 50 yards this years.

*When Boulware scored, it was the fourth defensive touchdown of the season for the Tigers.

Ammon Lakip
RS Jr. Kicker
#36 5-10, 200
Alpharetta, GA
View Full Profile made a 49 yard field goal in the second period. His longest as a Tiger and tied for the longest in Clemson bowl history. Obed Ariri had a 49-yarder against Pittsburgh in the 1977 Gator Bowl.

*Grady Jarrett had a career high 3.5 tackles for loss in his 48th and final game as a Clemson Tigers.