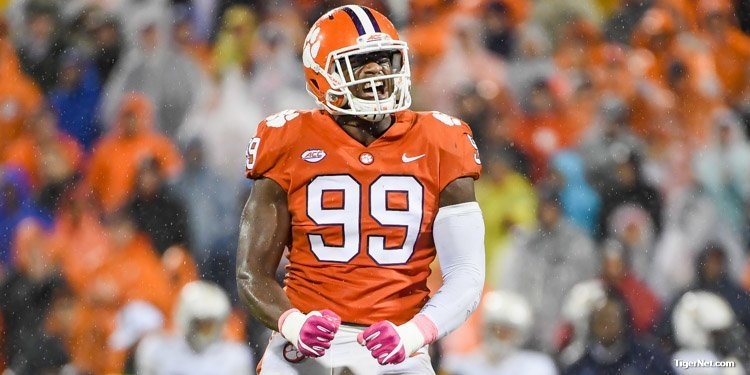 Ferrell has been outstanding this season

Charlotte, NC — Clemson defensive end Clelin Ferrell has been named one of five finalists for the Ted Hendricks Award. The honor is presented each year to the top defensive end in college football. Former Tiger Da’Quan Bowers won the award in 2010.

Ferrell is joined on the list of finalists by Nick Bosa of Ohio State, Bradley Chubb of NC State, Sutton Smith of Northern Illinois and Marcus Martin of Slippery Rock.

This marks the sixth time this decade that Clemson has had a finalist for the Hendricks Award. In addition to Bowers winning the award in 2010, Andre Branch in 2011, Vic Beasley in 2013 and 2014 and Shaq Lawson in 2015.

Ferrell leads Clemson’s defense in tackles for loss with 16 for 70 yards and sacks with 8.5 for 54. The sophomore has 57 tackles overall, 45 first hits and 12 assists. He is fourth on the Clemson team and first among defensive linemen.