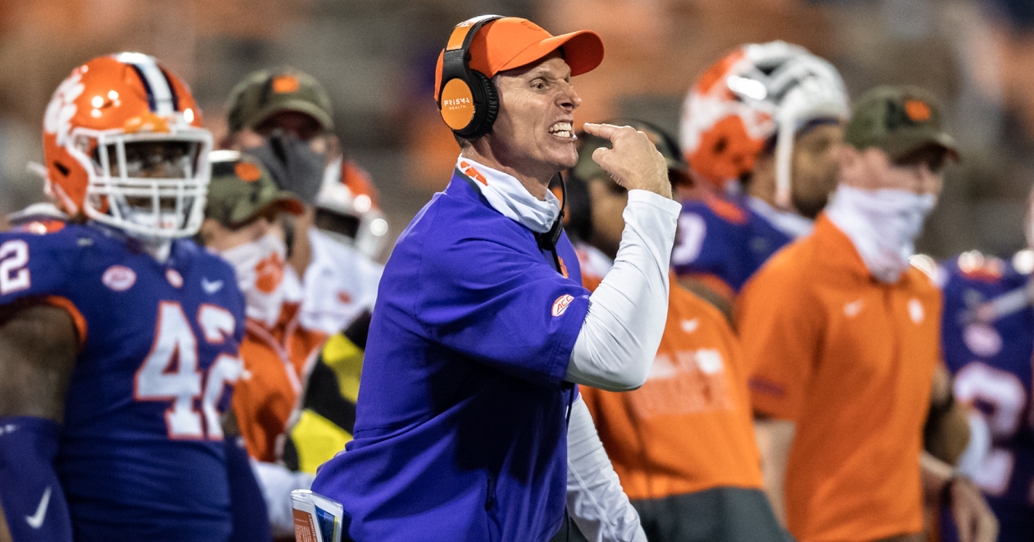 "This is an incredibly special opportunity. Julie and I and our family are extremely grateful for the belief in us — and certainly in me — to be the next head coach at Oklahoma, one of the winningest and most tradition-rich programs in college football history. Our memories from Norman, where all four of our children were born, have been nothing but great. We're looking forward to making another decade-plus of incredible memories as we transition to a new era of Oklahoma football, especially with the opportunity and the challenge to join the SEC, the premier conference in all of college football. Joe Castiglione, President Harroz and the Board of Regents have given us incredible support that equals the best of the best in our sport. There's no question we are equipped to compete at the very highest level and attract the best players from across the country. The OU logo has never been stronger."

"Coach Venables is the perfect leader for the next exciting chapter of Oklahoma football as we look ahead to a new era of competition. OU is a destination job with an iconic program positioned for sustained success to which Coach Venables has already contributed. He is a charismatic and proven coach, and with 13 years under his belt on the Sooner coaching staff, he's one of our own. Brent is committed to excellence on and off the field — to ensuring that his players succeed as athletes, students and individuals. With his years of experience in building up teams and winning championships, I have high confidence in the unlimited potential of our program under his leadership. He knows what OU football is all about because he's lived it, and there's no doubt he is up to the task. We're thrilled to welcome him, his wife, and their children Jake, Tyler, Laney and Addie home to OU."

"This is a truly great day for Oklahoma — for our program, our current players, former players, recruits and fans. Coach Venables is a proven winner who over the years has helped his teams earn 13 conference championships and three national titles, and has developed one of the country's consistently best defenses. A born leader, he helped build and sustain an exceptional culture during his 13 years here at Oklahoma and his 10 seasons at Clemson. He has a track record of establishing meaningful relationships with his players and preparing them for the next level. Brent embraces competition and the challenges that come with it, and there is no doubt in my mind he is the right man to lead OU football into its next great era. We couldn't be more excited for Brent to return to OU as our head coach and for him, his wife Julie and their children Jake, Tyler, Laney and Addie to call Norman home again."

"Brent was a major part of our 2000 national championship team here at OU, won two national titles at Clemson and, all told, has coached in eight national championship games. He knows the formula to win national championships and has the toughness, the attitude and the fight that I think will elevate our program in a lot of positive ways. I've always loved his energy, excitement and passion for the game — it clearly spills over to his players. He has the absolute right experience to come in at this time and really boost our program. With 13 years here at OU and 10 at Clemson, you couldn't ask for better preparation to handle a job like this and handle it well. He's taking over a 10-2 team that has so much more potential, and the bottom line is he's the perfect guy to get us to the next level. He has an incredible support system with his wife Julie and his children, and it'll be great having them back leading the program."

"I am so very proud of Joe Castiglione for hiring a truly special Wildcat in Brent Venables. Brent and Bob Stoops started their Division I careers with me at Kansas State and were principal figures in the university's lengthy successes. Like Bob, Brent is dedicated to the growth and development of young student-athletes. He is extremely knowledgeable, a strong leader, a hard worker and committed to daily improvement and the highest degree of success. Having experienced several Division I national championships, he knows the path. Brent is also a caring family man to his wife Julie and their four children, and his gracious parents Ron and Nancy. OU will continue to be highly successful under his guidance with the aid of Joe Castiglione and Bob. I'm so very proud of each of them."