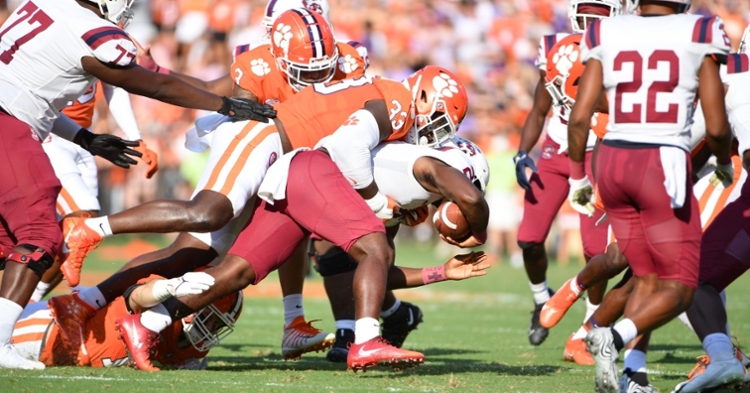 Ruke Orhorhoro makes an early tackle against the Bulldogs.

The last time the Clemson defense played back-to-back games without allowing a touchdown dates all the way back to 2017 when the Tigers opened the season with a 56-3 win over Kent State and allowed just two field goals to Auburn the following week. Clemson has started the 2021 campaign allowing just two field goals, one to Georgia and against South Carolina State.

The Tigers defense allowed 235 yards to SC State and picked off the quarterback once. Clemson head coach Dabo Swinney said he was most pleased with the defense in the 49-3 win.

“It’s been two weeks without allowing a touchdown," said Swinney after the game. "I think it’s been since 2017 since we’ve done that. Not only not allowing a touchdown, but a goal-line stand on top of that. We did that with the backups in and that’s something that has been troublesome around here with Brent, is putting the backups in and seeing a dropoff.

"I thought our first group of guys played awesome today. We leveraged the football and did what we needed to do. Two weeks in a row they couldn’t get into the endzone. I know we're a better team than South Carolina State, but Georgia is pretty good too.”

Clemson defensive coordinator Brent Venables was also pleased with how his group has played so far this season, especially getting back to the winning ways inside of Death Valley.

“We’re always pretty hard on ourselves, but we’ve played pretty good,” said Venables. “We’re never really satisfied, but I appreciate the effort from our guys, the work they put in this week, the preparation was outstanding. I thought we had a mature mindset both in the meeting room and on the practice field. I thought our execution was pretty good, we had our moments where it was really good, and moments where it wasn’t so good.”

The Tigers had 30 players register a tackle against the Bulldogs and also saw the backups hold SC State out of the endzone as Swinney mentioned. Venables was happy to get some young guys some experience in a college game.

“We were pretty good with fundamentals today, top to bottom,” Venables said. “We played a ton of guys this week. Holding offenses out of the endzone two straight weeks is not an easy thing to do, regardless of who you’re playing and considering how many guys we played tonight. Thankful we got the opportunity to do that and the guys had fun going out there and competing.”

“If holding a team out of the endzone was easy, everyone would be doing it,” said Venables. “We have a philosophy here that we play a lot of guys and develop our team, so seeing those guys' hard work pay off was great. I think we have a chance to be a really strong defense.”

With all the talk coming into the season on the Clemson defensive line and how great they would be, many fans and critics forgot how good this Tiger secondary could be. After two weeks they have held the opponents to zero touchdown passes and forced two interceptions. Venables says he’s pleased with the way they have played during the first two weeks of the season.

“I think that’s back-to-back weeks they’ve been around 4.9 yards per completion,” Venables said. “They’re also around 30 percent completion rate. I think we did well given the circumstances. I think they’ve been pretty solid and don’t want to take anything away from two weeks of being pretty dang good.”