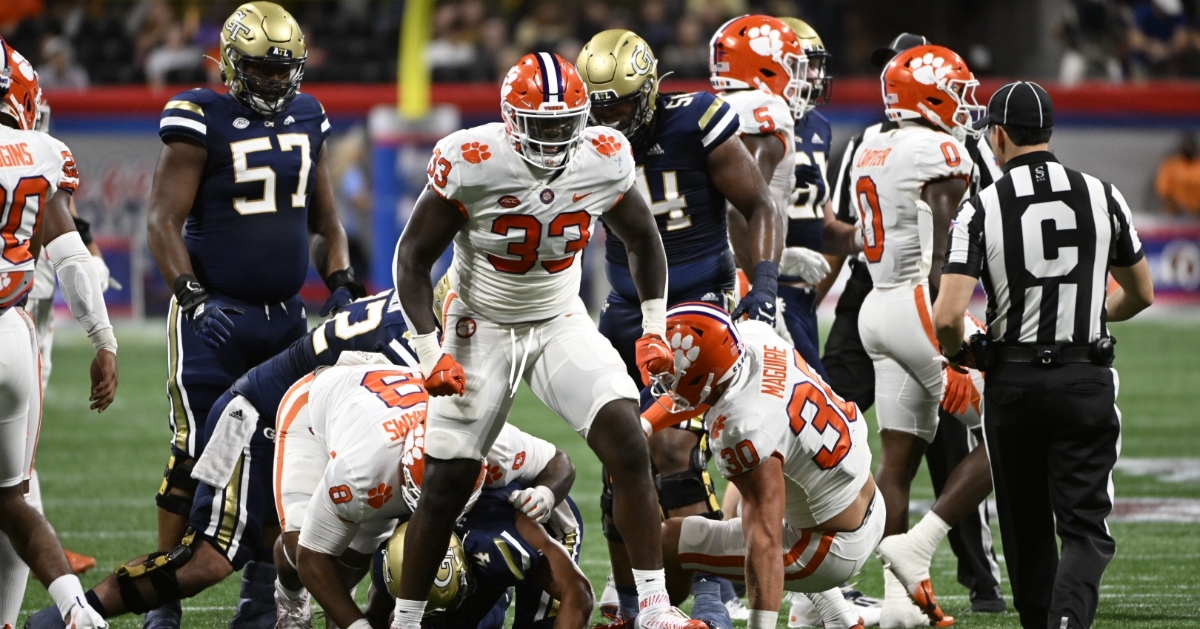 ATLANTA – Clemson had to labor on Labor Day to beat Georgia Tech, but in the end, it was a holiday rout.

A bend but don’t break defense, solid special teams and just enough offense were enough to beat the Jackets 41-10 Monday night at Mercedes-Benz Stadium Monday night as part of the Chick-fil-A Kickoff Classic.

Clemson’s special teams were on point – the Tigers blocked two punts, BT Potter kicked two field goals and punter Aidan Swanson averaged just over 42 yards per punt in the win. On offense, DJ Uiagalelei was 19-for-32 for 209 yards and a touchdown. Will Shipley carried it ten times for 42 yards and two touchdowns, while Beaux Collins caught three passes for 54 yards and a touchdown.

The teams didn’t show much offensively in the first quarter, and it was special teams that helped get the Tigers on the board in the second. Tech faced a 4th-and-7 at their own 31, and David Shanahan dropped back to punt. The punt was blocked by Carson Donnelly and bounced near the sideline. Brannon Spector picked up the loose ball and returned it 13 yards to the Tech five.

Three straight running plays netted just four yards but the Tigers called a timeout and elected to go for the 4th-and-goal at the one. Will Shipley took it off left guard and bounced into the endzone for a 7-0 lead not quite midway through the second quarter.

The Jackets put together a nice drive that crossed midfield but missed a 50-yard field goal. The Tigers took over at their own 33 and moved down the field quickly, reaching the Tech six in just five plays. Facing a third-and-goal at the six, Uiagalelei was flushed out of the pocket and rolled to his right. Beaux Collins worked the back line of the endzone and Uiagalelei threw a dart for a touchdown and a 14-0 lead with 3:52 to play in the half.

The Jackets added a 43-yard field goal from Jude Kelley late in the second quarter, and Clemson led 14-3 at the half.

The teams traded punts to start the second half, but Tech put together a seven-play, 53-yard drive that ended with a 13-yard scoring pass from Jeff Sims to EJ Jenkins. The Jackets used a variety of screens to negate the Tiger pass rush on the drive, and all the momentum was on the side of Tech.

However, the Tigers responded with a 12-play 63-yard drive that ended with a 29-yard field goal from BT Potter, but it looked like Clemson was starting to find a little rhythm on offense.

Clemson’s defense forced yet another Tech punt, and the Tigers took over at their own 26. Facing a 3rd-and-4 at their own 32, Uiagalelei was swarmed and it looked like he was about to be sacked for a big loss. At the last second, however, he flipped a lateral to Shipley, who ran 10 yards for the first down.

The offense clicked the rest of the drive, and Uiagalelei added the final touch with a nine-yard scoring run that gave Clemson a 24-10 lead late in the third quarter.

The Jackets turned it over on downs deep in their own territory two drives later, and the Tigers turned into a 29-yard field goal from Potter to lead 27-10 with 8:45 to play.

The Jackets were once again forced to punt and for the second time on the night had one blocked. Shanahan took too long to get the ball away and freshman linebacker Wade Woodaz blocked it. LaVonta Bentley picked it up and returned it seven yards to the Tech 18. Uiagalelei picked up a big third down with a 10-yard run to the Tech three, and Shipley finished the drive with a three-yard scoring run that made it 34-10 with 6:27 to play.

The last time Clemson blocked two punts in a game was in 2007 against South Carolina.

Cade Klubnik took over on the ensuing possession and despite playing with a bevy of reserves, led a 10-play, 66-yard drive that looked way too easy. Klubnik tossed a three-yard pass to Will Taylor for the score, and with under two minutes to play the Tigers led 41-10. Klubnik was 4-of-6 for 50 yards and the touchdown on the drive.