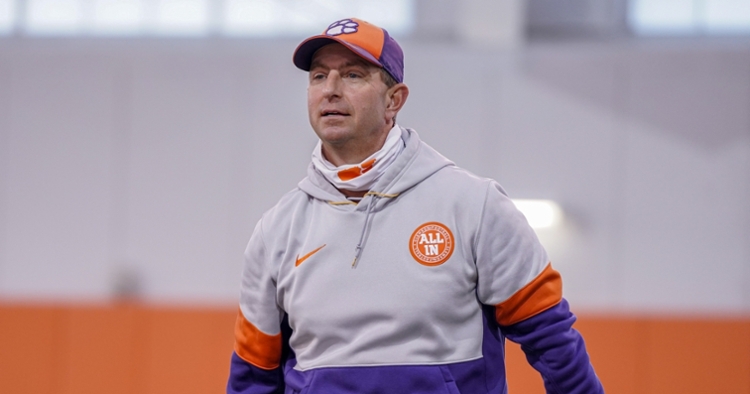 Swinney and the Tigers have handed out the third-fewest offers in the FBS.

Five-star prospects are considered to be the elite of the elite when it comes to college football recruiting, and some schools throw out offers to every highly-touted prospect in the rankings. Not Dabo Swinney, and not Clemson. Those prospects have to fit the culture and the vision of Swinney’s program before an offer is extended.

The Clemson coaching staff is once again handing out offers at a slower rate than most of the other programs in the country, with just 60 going out for the 2022 recruiting cycle. A few hours down the road, the South Carolina coaching staff under new head coach Shane Beamer has already handed out 201.

Swinney told Colin Cowherd this past week that he’s looking for more than just football players, and that he can tell from a conversation with a prospect whether they fit the Clemson model.

“I don't even have to go on a trip. I mean I can spend five minutes with a guy,” Swinney said. “I think that's something that has led to our success. We've never signed transfers or junior college players. Everything has been through the draft if you will. We may have to change or adjust, who knows, but that's been our philosophy from day one because we've been a developmental, relationship-driven program. And if that's your philosophy, you better be right on the front end. Nine out of 10 years, top 10 academically. You can't have a lot of attrition and running guys off and things like that. Our kids graduate. We have a 98% graduation rate since I've been the head coach. That's the number one thing in our program.”

Swinney said his life experiences have helped shape how he runs his program.

“I've had a lot of great experiences but walking across that stage and getting my degree at Alabama made me different from everybody else in my family, and it gave me opportunities that my mom and dad, my brothers, that they didn't get in life because of that,” Swinney said. “I also saw firsthand a lot of players, teammates, that the band cheered loud for them and everybody was cheering for them, and then all of a sudden, football's over and they don't have anything. Because back in those days, you just majored in eligibility. There were a lot of guys who just stayed eligible every year and they were there three, four years and weren't any closer to a degree than they were when they walked in the door. Thankfully, all those rules have been changed.

“I just have never wanted that for my players, and so the number one thing in our program is valuing education and getting your degree. Just 1.7% of college players play in NFL and it's a shame that we make it all about that. That's not what it's all about here. I love that. Hey, I'm second in draft picks as a head coach since I've been a head coach. Second and first-round picks. That's great, but we're 98% graduation rate, nine out of 10 years top 10 academically. Christian Wilkins won the Campbell Trophy. Trevor Lawrence graduated in three years, Deshaun (Watson), two and a half years. That means more to me than anything, is knowing that when football goes away, whenever that is, whether it's in college or right after college, that they're equipped and they've got that education to get a job and to be able to have a career doing something because there are so many places you can't get a job if you're not qualified. So, that's important to me.”

He then thanked his first few recruiting classes – including the Dandy Dozen – for believing in his vision.

‘When your philosophy is what it is here, you have to be right. Early on, had to take a few more chances on some guys,” Swinney said. “You're trying to build a program, and when you get a job, nobody came there for you to be their head coach, so the first thing you have to do is you got to recruit your team. You have to have a vision and you have to articulate it and you got to get them to buy-in. And that's why I'm forever thankful for my first few teams because they're the forefathers of what we have today. Because those kids had to make a decision to buy into the way I wanted to do things and what we were going to be about. Now, to protect our program, it's all about don't avoid red flags. So many people just look the other way. The philosophy of our program is to serve their heart, not their talent.”

He then said that the Clemson coaches have to be incredibly honest with recruits, sometimes brutally so.

“We're incredibly transparent, like brutally. If you look at how many... I think we've had three de-commitments in six years and that's because we're incredibly transparent,” Swinney said. “Sometimes people say, ‘Oh, we got to de-recruit them.’ If we got to de-recruit somebody, then we weren't authentic. We weren't genuine. We didn't tell them the truth. I don't want to de-recruit anybody. I want them to know, ‘This is the way it's going to be. If you don't go to class here, you ain't playing. If you're not going to follow the rules and not be a good citizen, you going to be out smoking dope, whatever, you ain't playing.’ I mean it's just that simple. Don't come here because we're not going to use you. We're going to empower you; we're going to serve your heart. That's been that way from day one and so that's not for everybody.

“But we have to get the right guys, and there's been a ton of guys, a ton, that have all kind of offers that they don't ever get an offer from Clemson. In fact, the last time I looked, it was about a month ago or so, the Power 65 Teams, I think we were third in the fewest offers. So, the number one team had 400 something offers and we had 50. Alright? We just don't offer many guys, but our offers mean something, too. If you get an offer from us, it's a committable offer. There's no uncommittable offer or whatever that means.