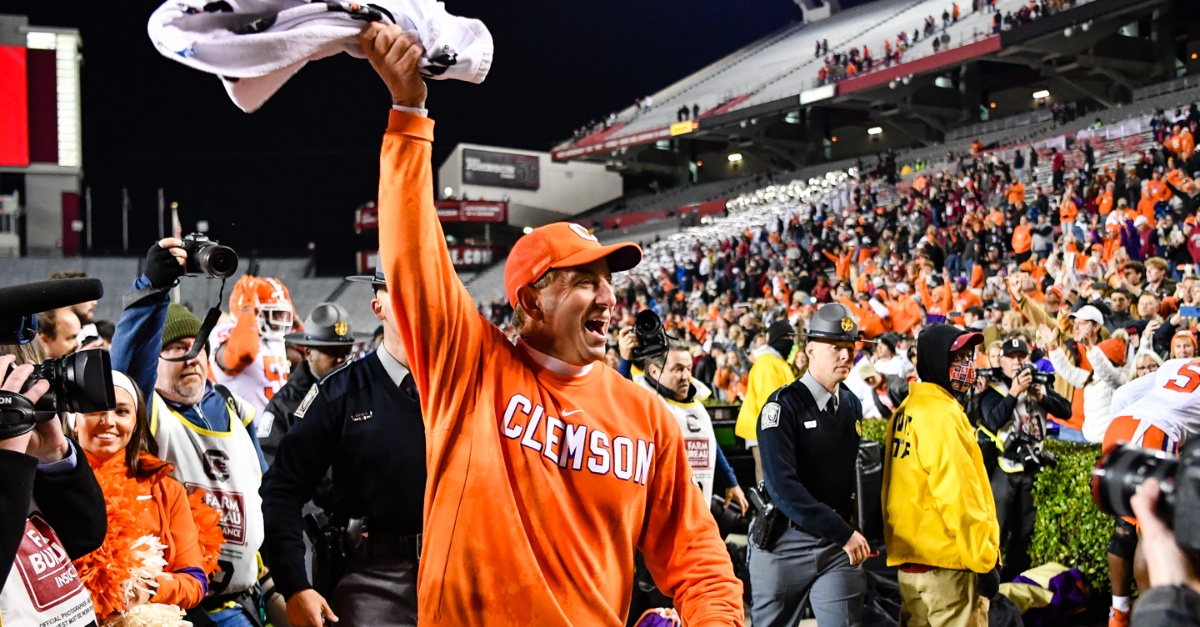 Clemson head coach Dabo Swinney knows it’s the time of year when players opt out of bowl games in order to protect themselves and their future careers, but he hopes that all of his players decide to play in what he calls a great bowl game.

Swinney was asked if he was worried that because the Tigers were not playing in the playoff -- players would opt out.

“First of all, this is a great bowl. This is not a lower-tier bowl. I think this is a great bowl, and it's a great opportunity and a great experience for us as coaches and our staff and great student-athletes,” Swinney said. “I look at it as a real honor to be a part of it. So we're excited about that.

“But as far as all that other stuff, man, I hope everybody's there. Whoever we got, we're going to be ready and be excited to go play. Let me just say, [we're] super excited to be part of the Cheez-It Bowl. Orlando is an incredible destination and experience. Having been a part of bowl experiences down there in the past, it's just a place that I know our guys will certainly enjoy and then have the opportunity to compete against a great and well-coached Iowa State team in a great matchup.”

This year’s Cheez-It Bowl will be the first meeting between the Cyclones and Tigers and just the second Orlando bowl trip for Iowa State, which returns after facing Notre Dame in the game in December 2019.

Clemson will be making its fourth appearance in the Cheez-It Bowl and its first since 2014, when the Tigers defeated Oklahoma in what was then known as the Russell Athletic Bowl. Clemson has also appeared in the Citrus Bowl three times (1988, 1989, and 1992) and won the 2016 ACC Championship Game over Virginia Tech in Orlando.

“It’s going to be a great matchup,” Swinney said. “Again, something we're really looking forward to and just honored to be chosen to be a part of it. A great opportunity for our team to continue to build momentum into next year, continue to improve, and hopefully finish our season in a very positive way.”

Swinney said the break between the regular season finale – a 30-0 win over South Carolina – and the bowl game will give his wounded team a chance to heal.

“Hopefully, we'll get a little bit of work. We'll get some work on their own this week from a film study, et cetera, as we dive in as a staff. Definitely very hopeful that we can be as healthy as we've been maybe all season, by the time we get to the bowl game. So we'll see. Certainly hopeful.”