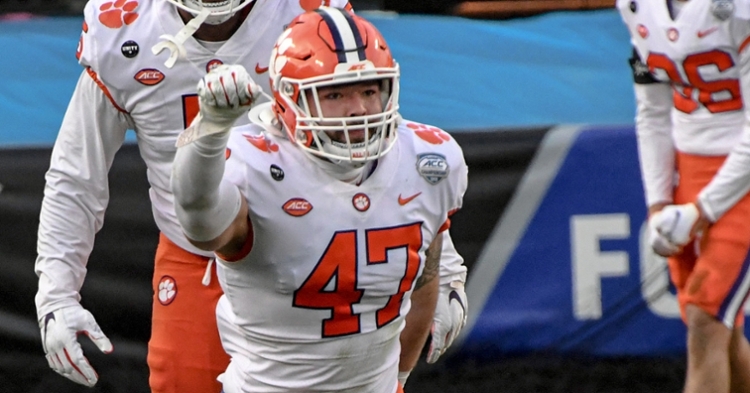 Skalski says the Tigers are disrespected in the polls.

CLEMSON – Linebacker James Skalski sees disrespect when he sees the current college football rankings, but he also sees an opportunity. Why? Because no one remembers September. It’s all about how you finish in November.

Clemson dropped four spots to No. 25 in the Coaches Poll released this week and is out of the AP Poll after posting a 3-2 record during the season’s first five weeks. Clemson was punished and plummeted in the rankings – 17 spots in one poll - after losing to NC State, while other programs drop just a few spots in the same scenario.

“It’s kind of frustrating when you look at some of the rankings,” Skalski said Monday. “We’re an unranked team. Our two losses are against the No. 1 team in the country at a natural site, 10-3, and in double-overtime versus a top-25 team. That’s kind of frustrating on my part. Almost feel a little disrespected. I mean, I get it. There’s plenty of time left to climb up the table again.

“Nothing’s off the table for us. Nothing is. We just have to keep one game at a time and try to win the next one. That’s all we’re going to focus on.”

I asked Skalski if Clemson was held to a different standard than other programs.

"I think we’ve been in the past,” he said. “I think we’ve earned probably a little more respect. I think we should be given a little more, right now in particular. A&M is a great football team. That’s a great football team. Alabama? C’mon. Everyone knows they’re a top-4 team. I think so. All we can control, we can control. So that’s what we’re gonna do. Just keep playing. All of that will take care of itself.”

Skalski then added that all the Tigers can control now is how they finish, and that everyone will remember November.

“It's all about how you finish, right? We always say in here that no one remembers September,” Skalski said. “They remember November. That's all they remember when it's all said and done. Even if you start bad, it's all about how you finish. That is all our focus is now. That's done. 3-2, there is nothing we can do to change that. We can grow from it and get better and I believe we are doing that. I guess we will find out real soon.”

The Tigers get the chance to start the rest of the season on a high note when they travel to Syracuse to take on the Orange in a Friday night contest in the Carrier Dome. Skalski said he is looking forward to the challenge and that he is traveling with a team that has earned its stripes.

“It's great. They've got a good spot up there and a lot of history in that dome,” Skalski said. “It gets loud and they are going to bring their A (effort). They are always a great opponent and a great game for us. We are definitely battled tested. We've seen it all and been through it all. We have. You've seen it. We've earned our stripes a little bit.”