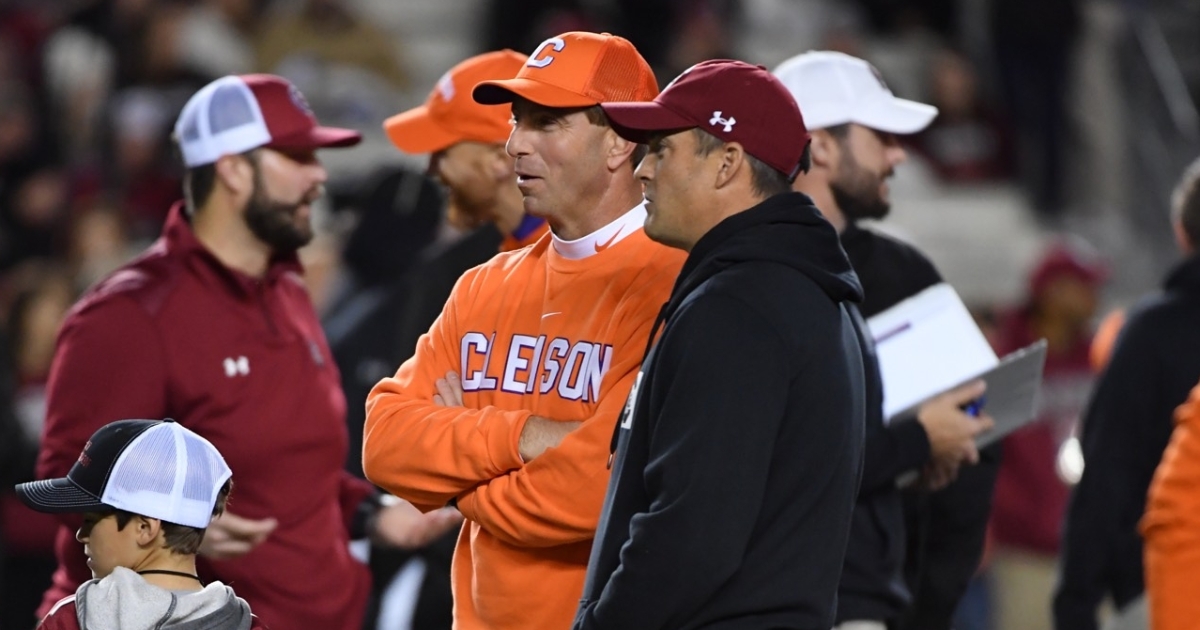 South Carolina head coach Shane Beamer says his squad is playing a Clemson team that is playing its best football.

South Carolina and Clemson face off at noon Saturday (ABC) in the annual rivalry game, with the Tigers looking to claim a series-record, eighth consecutive win over the Gamecocks.

Beamer said that the Tigers get everybody’s best shot every week.

“A fantastic team that we are playing on Saturday that you could argue, they are playing their best football down the stretch,” Beamer said. “I think if you look at them year after year, they just continue to get better as the season goes. Another 10-win season for them. Another opportunity to win an ACC championship. That is not easy to do. I know everybody thinks you are supposed to roll the balls out, and you are supposed to win every Saturday. They get everyone's best shot every single week in that league because of what they have done. To be sitting there with 10 wins again is remarkable and an opportunity to win another conference championship.”

Beamer said the Tigers might have put together their best effort in last week’s win over Miami.

“They are extremely talented, as you know. They are extremely well-coached, as you know. Offensively, they are playing really good football here especially last week, you could argue was their best game. They are protecting the football,” Beamer said. “They ran the quarterback a little bit more last week. Shipley at running back, is a heck of a player. They have dynamic receivers. Veteran offensive line. Defensively, their front seven is probably the best we have faced off season. Their group of defensive line and linebackers, every single one of them will play in the NFL. So they are really, really good upfront as well. They have weapons on special teams also in the return game.

“(Will) Shipley is back returning kickoffs and is a threat back there also. We have to have a great week of preparation from our standpoint to give ourselves an opportunity to go play even better than what we did last Saturday. Our guys our excited about the challenge and excited about the opportunity. It is a great rivalry. I have been blessed to be a part of some of the iconic rivalries in college football during my coaching career and this one is right there at the top."

Beamer said it will take a team effort to stop Shipley.

"He is a great player. He is fast, he is instinctive, he is tough. He has great vision,” he said. “He runs really, really hard downhill. They hand him the ball and there is no dancing around. He is downhill. We have to do a great job of stopping the run. It takes all 11. It is not just your defensive line and your linebacker. It takes everybody on defense to be able to do that. They want to him in a lot of different ways whether it be swing screens or handing the ball off or whatever it might be.

"We have to be, one, aware of where he is at all times in the run game and the pass game but certainly, it starts with stopping the run. Then, they have weapons outside of Will as well that they can get to also that we have to be cognizant of."