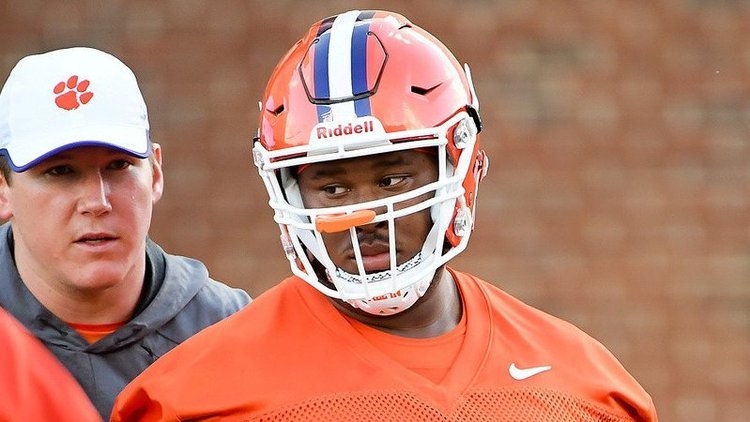 Jordan McFadden spent most of last season on the Clemson scout team, going head-to-head against Tiger defensive end Clelin Ferrell every day, and Ferrell took the young offensive lineman under his wing.

McFadden was part of the 2018 recruiting class and played in three games last season (Furman, NC State, and Louisville), totaling 17 snaps. His season ended after the Louisville game, and McFadden spent the rest of the year on the scout team.

“It's been a year just to work hard. It's been a year to get bigger and stronger, learn the playbook better and work on my technique,” McFadden said. “Just an overall year to help me be a better player in the long run.

Going against Ferrell each day was a learning process.

“Just how quick they are and how fast they are off the ball was something I learned,” McFadden said. I went against Clelin (Ferrell) a lot this year on scout team and he's taught me a lot. He has taught me what a defensive end likes to do in certain situations, whether it's speed or power or something like that and what is a good way to stop that. I've definitely learned how fast they are off the ball.”

McFadden told TigerNet he has improved his squat from 435 to 515, and is benching 345 after benching 315 when he arrived on campus. He said he weighs 295 now but hopes to be a few pounds heavier when fall camp arrives.

What did he have to work on the most?

He expects to spend his time on the right side of the line next season.

“During the JV practice, I played a lot of right tackle,” McFadden said. “But Coach Caldwell has also put me in at right guard a little bit, so I've been learning a little bit of both. I think going into the spring I will be playing right tackle.”