There is a spy in our midst and has been for months. I will now bring you the details.

And, before you think this is satire, or a joke, or simply a way to fill space, this is the absolute truth and can be confirmed by the authorities at Clemson, by the construction folks working on Death Valley, and by tailgaters last weekend. We even have picture proof.

There is a rooster, a Gamecock if you will, loose and running around Death Valley.

According to an official I spoke to this week, the rooster has been chasing construction workers, chasing students, and generally made a nuisance of himself last week at the Furman game. He has been hanging out in the cemetery area, but occasionally sneaks down to the stadium for a look. They’ve tried to catch him, but he’s elusive.

I also have to say this – it’s unsettling to drive over to Death Valley and hear a rooster crow. It’s not natural.

His origin? Unknown. And that’s the kicker. How did a live rooster get to the stadium?

I hypothesize this – Shane (Mayo) Beamer, the C*ck Commander himself, has sent this rooster, named 007 because of seven straight losses to the Tigers, to spy on the Tigers. I’ve been told – and haven’t seen this myself – that 007 has eluded capture more than once by going up a tree. Perhaps 007 is a drone, trying to keep the Gamecocks from suffering Ocho Oucho??

Again, this is real. There is a real rooster hanging out over there. He’s loud and profane and in the words of one of my friends, unbelievably fit. Maybe if you hang out over there Saturday you will see him, this 007, chasing down tailgaters frying up his cousins. 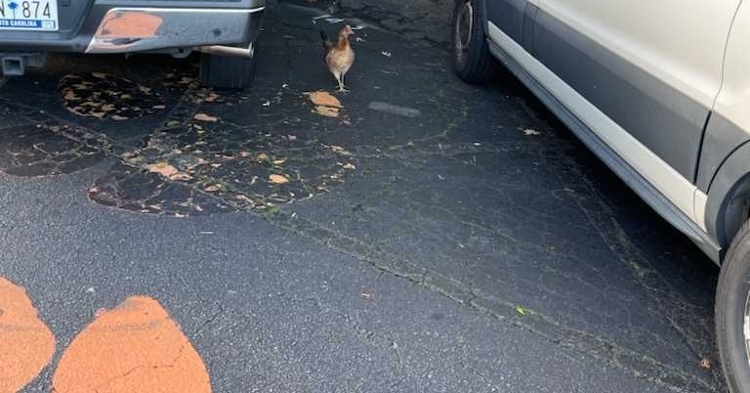 007 hanging out on the hill behind the stadium pictured in the story. "

But a chicken? A live chicken? In Death Valley? Perhaps the most realistic part of this entire story is the fact that not once, not one time, has this chicken dared to enter the endzone. They don’t do that around these parts.

Now, onto some picks so I can earn some BOGO Dollar General coupons from Crump. Also, there just aren’t a lot of good games this week, so I am gonna make this a shorter affair and chase down 007.

FSU has a signature win over LSU (I guess) and Louisville rebounded from an embarrassing loss at Syracuse to start the season with a win over Central Florida last week. The Cards won’t be as welcoming to the Seminoles as they were to recruits this summer – there will be no fancy cars, no hookers, no basketball tickets, no jets. Only a bunch of rowdy fans who have spent the entire day drinking bourbon icees (it’s a thing) and talking about basketball in the 80s. That bunch of liquored up rowdies always does its part, right up until the team does something stupid, and then they leave and check the racing forms from Churchill Downs. I get the feeling they will be there for most of four quarters tonight. LOUISVILLE 33, FSU 30

Mayo Beamer and the molting hens welcome a surly bunch of Dawgs into Williams-Sonoma for a nooner. Typically, these cranky hens don’t like it when the guard dog comes sauntering into the hen house, looking to assert his will. They shed their feathers and cluck and drop eggs while they run, but every once in a while one of them gets in a good shot and the dog has to retreat. There will be no retreat Saturday – these dogs are mean and talented, and no bunch of bald chickens is gonna run them out of the yard, not with Stetson Ermaier Foster Chadlington Bennett the 19th leading the way. GEORGIA 38, HENS 13

The corn farmers fired their coach this week, and they take the corn silk out of their hair long enough to welcome Brent Venables and his wagon train of Okies into Lincoln. This was once one of the sports’ premier rivalries, back when both ran the wishbone/option and were coached by guys like Barry Switzer and Tom Osborne. The shine is off the rivalry these days, mostly because the corn farmers can’t decide on the proper foreman. In fact, they once had a guy that preferred cats to manure, and it led to all kinds of problems. A Venables’ defense won’t help them any this week, either. OKIES 37, HUSKERS 20

Aggie fans looked at the schedule and envisioned this being a College GameDay appearance as two programs on the rise collide in NIL Station. Instead, the Aggies and Little Jimmie Fisher got whipped on by some moonshiners out of North Carolina last week, and now the ESPN crew is headed into the hills to celebrate with some cloggin’ and quiltin’ and shinin’. But his one will be a good one, a fight from start to finish, and I want to pick Miami to win. I really do. But I get the idea that Little Jimmie’s feelings are hurt and busted after getting smacked around last week and his team will be ready to play. But I also wanna pick the team with the best QB, and that’s Miami. Decisions, decisions. AGGIES 23, MIAMI 20

Lane Kiffin and his band of Rebels head to Atlanta for a battle with a hive full of Waffle House guzzling Yellow Jackets. Tech’s Geoff Collins is big on show – his Waffle House cup and using all three timeouts on one play and lifting weights during press conferences and in the huddle – but that hasn’t translated to wins. They might keep this one in doubt for a quarter. Or two. But that defense isn’t good enough to keep the Rebs at bay. OLE MISS 38, TECH 17

Ah, the Bulldogs. Home of Terry Bradshaw. Home of Phil Robertson. Home of the Lady of the Mist. Ruston, Louisiana, is a neat place, visited by tens and tens of people every year. But this game is in Clemson, home to a cranky rooster named 007 and a bunch of hurting and angry Tigers. The offense hasn't been hitting on all cylinders, or any cylinders in the second half last week, and one has to wonder if this is who we are now. Grind out every drive on offense and hope the defense plays great. The Tigers will score some points and the defense will play a lot better and fans can enjoy the light show put on by the new videoboard and all of the new lights installed in the Valley. CLEMSON 45, TECH 10