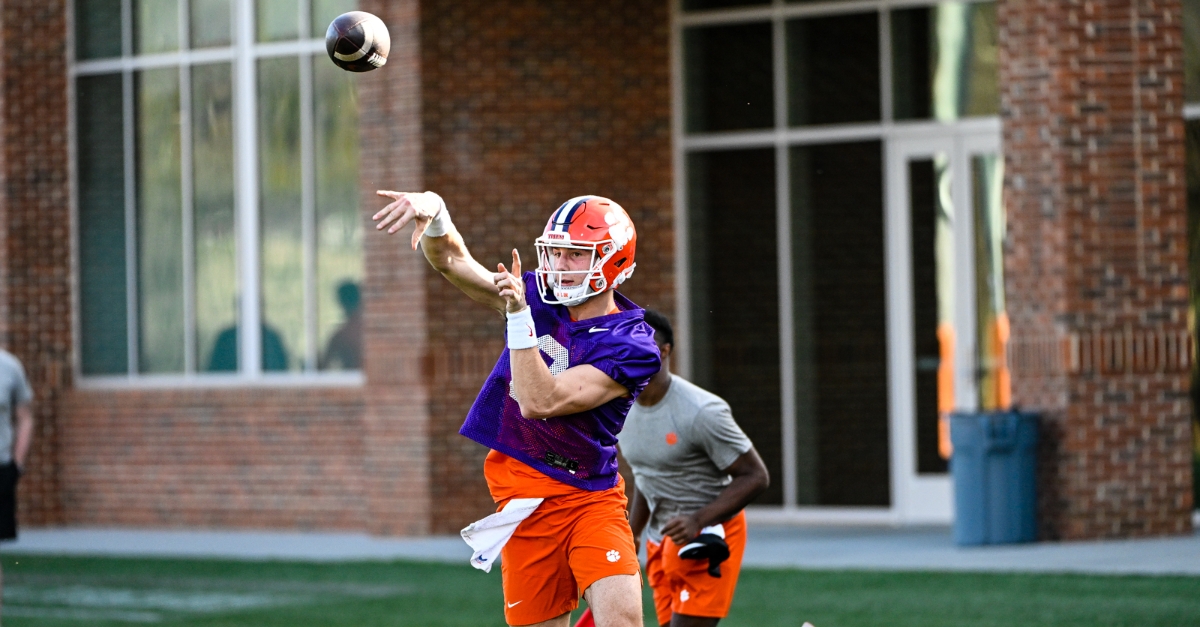 Cade Klubnik has impressed during the first part of spring camp.

The position battle that everyone around Clemson is watching this spring is quarterback, where the incumbent is trying to hold off the German Shepherd puppy. According to offensive coordinator Brandon Streeter, no one has earned a starting spot. Not yet.

Returning starter DJ Uiagalelei’s struggles during the 2021 season are well-documented and he entered the spring looking to take advantage of lost weight, fix his mechanics and keep a grasp on his starting spot. On his heels? Five-star signal-caller Cade Klubnik, who many expect to push Uiagalelei for that starting spot all season.

Head coach Dabo Swinney likes what he’s seen out of Klubnik, comparing him to a German Shepherd, saying the coaches can’t overload the freshman.

"That's just how he's wired," Swinney said. "Can't give him enough. I mean, he's just like a German Shepherd. Just like you know, he's just ready to go, all the time. 'Throw the ball, throw it out there.' He's just a very eager guy."

Streeter said that while he doesn’t know if he would call it a quarterback battle, Klubnik has been as good as advertised.

"I wouldn't say it's a battle yet, but of course, he's pushing," Streeter said. “He's been very, very good. I mean, it doesn't surprise me at all. You know, he's a very smart kid."

Swinney said Klubnik’s transition has been an easy one. 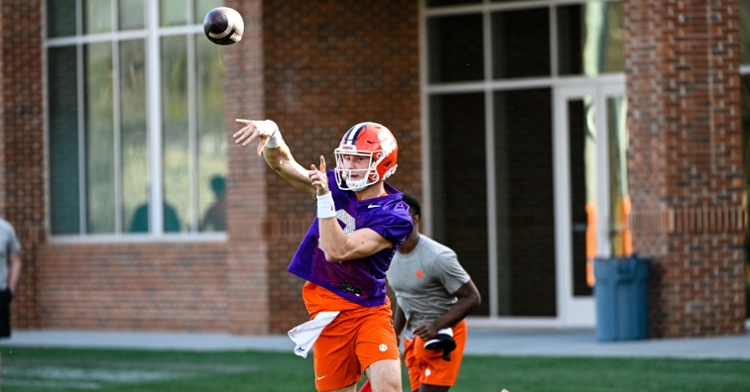 Cade Klubnik has impressed during the first part of spring camp. "

"It's been the same, he applies that to everything he does," Swinney said. "Whether it's at school, playing ping-pong. the dining hall, in meetings, he's just a very engaged kid. Super talented, very, very engaged and he just has an unbelievable foundation. Kids like that, they've had these high expectations for so long, big stages. And, you know, it's a little easier transition for those type guys than maybe some others."

"It's always a big test for these young guys that come in here mid-year," Streeter said. "And they come in here for a month and a half of school and then all of a sudden, bam, here comes spring practice. So it's a lot of being overwhelmed early on. He has handled it very, very well. There's always going to be something early on in the process of learning the learning curve, you know.

"Footwork is usually the one that is lacking the most. Because they're trying to piece together footwork, concepts, and protection, it's just a lot to think about and sometimes they just lose focus on their footwork. So that's something that will always improve in a player, especially the more he gets reps. So we overloaded him a lot with reps, which is what he needs. He needs a ton of reps so that he can go make mistakes, and then we can go and learn from it. And he's done a really, really good job and that's what stood out to us."

Streeter then went on to say that he has been pleased with all four quarterbacks – Uiagalelei, Klubnik, and former walk-ons Hunter Helms and Billy Wiles.

"I think all four of the quarterbacks that are taking reps are pushing each other," Streeter said. "And that's what I talked to all four of them about the beginning of the spring. It's just, man, we're here to get each other better.”

Streeter said the starter will be the player who earns the spot in practice.

“There is no automatic starter," Streeter said. "That's not how it works. It's not what our program is about. Our program's about earning it. And what's happened in the past, you got to re-earn. And so that's a big philosophy of our program.

"First off, DJ has done an incredible job between the bowl game and spring ball. Getting his body right, getting his mind right, and going to work and I'm really, really proud of him for doing that. And I wouldn't expect anything different. No excuse guy at all, and he just goes to work. And of course, with Cade getting here, another high-profile guy, that's gonna push you. And again, he's done a great job of that. He's handled that situation very, very well."