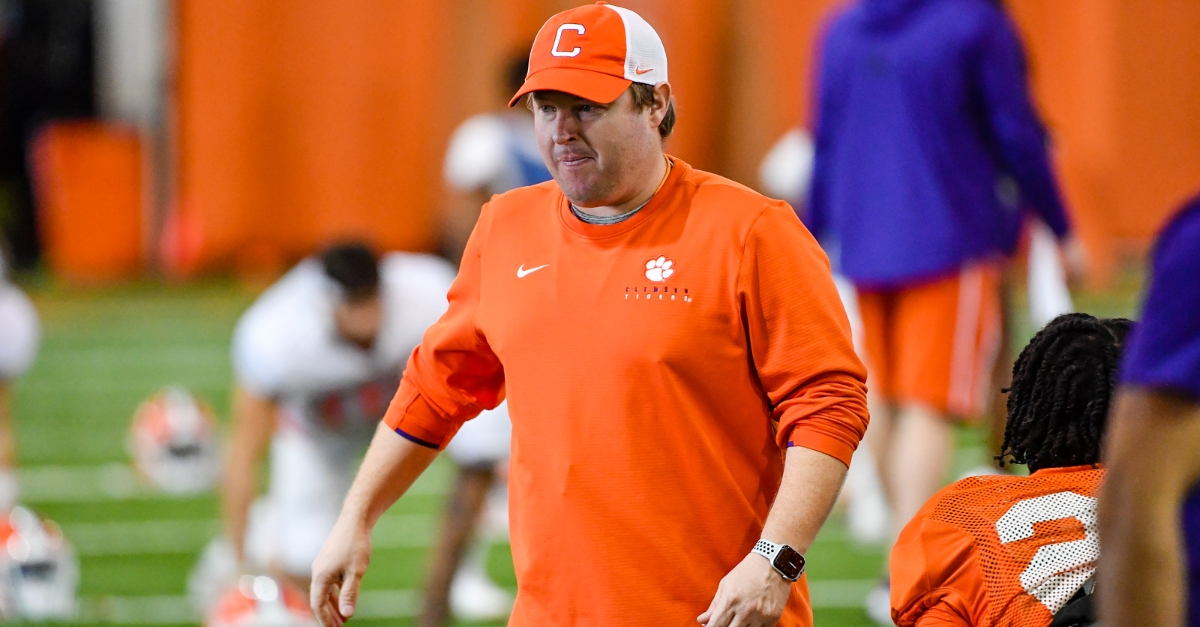 CLEMSON - Welcome to a whole lot of different.

Members of the Clemson media were allowed to watch the first four periods of practice Friday (just stretching and special teams work) and will have a more extended look Saturday. As for Friday, yes it was strange not seeing Brent Venables or Tony Elliott and their energy. Miguel Chavis and his usual energy was also missing (he’s now at Oklahoma), and get-back coach Adam Smotherman is now at Virginia.

Add in the fact that it was a mid-December bowl practice and the temperature was a balmy and sticky 70 degrees, and practice just had a different feel to it. There were some observations from the limited viewing window:

*Quarterback DJ Uiagalelei still has a big brace on his knee and a splint on his right index finger. It didn’t appear to be bothering him during warm-ups.

*Safety Nolan Turner was in a walking boot. I’ve been told it’s just precautionary (the same toe he injured at the end of the season) and he doesn’t really need the reps.

*Running back Kobe Pace wasn’t at practice, but I’ve been told he’s fine and was just attending to a family matter.

*Running back Phil Mafah still doesn’t look 100-percent (ankle) but he’s moving much, much better than he was at the end of the season. 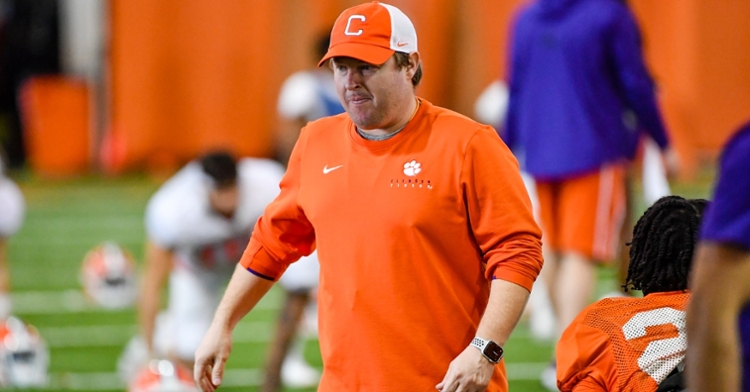 *Head coach Dabo Swinney said that wide receiver Joseph Ngata might play in the bowl game, but it’s unknown at this time. Ngata was in a green non-contact jersey at practice.

*Linebacker Baylon Spector, who is not playing in the bowl game after surgery on his right hand/wrist, was sporting a big soft cast. However, he still used his left hand to pull weighted sleds around the field, trying to help out any way possible.

*Linebacker LaVonta Bentley missed the last few games of the regular season but looked great at practice. He looks like he’s ready to go.

*New offensive analyst John Grass (the former head coach at Jacksonville St.) was all over the place. I’ve been told he is already fitting in and will be a great resource for new offensive coordinator Brandon Streeter. Grass already has a rapport with some of the offensive linemen it appears – he was walking up and down the line talking to players and looked like he was having a ball.

*Thomas Austin has moved into the role of tight ends coach after Kyle Richardson had previously scheduled a back surgery, and it’s obvious Austin is going to be one heck of a coach. You like to see a coach who is decisive and has no wasted motion during the limited practice times and Austin acts like he’s been coaching tight ends for years.

*It was definitely different watching new defensive coordinator and linebackers coach Wes Goodwin. We are used to seeing Brent Venables and his fiery intensity in every little drill. Goodwin is different – he’s not going to be a screamer and told everybody he has to be himself – but it’s obvious the players respect him and he knows what he’s doing out there.

Assistants Daniel Boyd and Kavell Conner were the most vocal of the coaches, and we fully expect there to be a learning period for Goodwin and the players. In other words, it will take time for him to find his voice. We will see more of the team – and Goodwin – during Saturday’s extended viewing session and have interviews with Goodwin and Streeter following the practice.