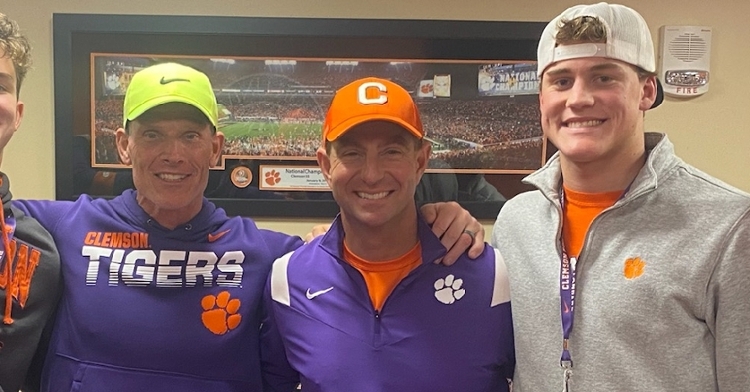 Wade Woodaz grew up listening to stories about Clemson University, and when it came time to make a college decision, he decided on his dream school.

Woodaz is the 2022 3-star safety/linebacker out of Tampa (FL) Jesuit that committed to Clemson on Thanksgiving.

Woodaz also reported offers from Utah, Iowa, Louisville, Miami, Vanderbilt, West Virginia and Georgia Tech. Woodaz visited Clemson for the Tigers’ home game against UConn in mid-November, and was in Salt Lake City the next weekend on an official visit. He also had talked about visiting Vanderbilt at some point in early December, but he decided to go ahead and commit to the Tigers

The Tigers didn't get in touch with Woodaz until October, but the relationship grew quickly.

"They first got in touch with me back in October and Coach (Brent) Venables texted me. He has been the main one recruiting me,” Woodaz told TigerNet. “He came by the school but I didn't think there was any way I could get recruited by them. That is Clemson. There was no way. But he ended up going to the game and he said he loved the way I played. We stayed in touch and then when I went up there they offered me.”

Woodaz grew up listening to stories about Clemson from his dad’s best friend, former Tigers baseball player Doug Livingston. Livingston was the second baseman on Clemson’s College World Series teams in 1995 and 1996.

“It's my dream school. Clemson has been my dream school since I was a little kid,” Woodaz said. “When that offer came along, I obviously wanted to take my other visits, but after comparing them and getting a game-day feel for what it was like, the visit was enough and I knew that was where I wanted to be. I grew up listening to his stories and then Clemson has been, along with Alabama, probably the most dominant program in college football the last 10 years.”

In nine games this fall, Woodaz has totaled 59 tackles, five pass breakups, an interception and a sack. While Woodaz has played primarily safety at the high school level, the Tigers view him as a linebacker moving forward.

“I don't have a preference for where I play. I will play wherever I can get on the field. I am brainy and I hustle and as humbly as I can say this, I am a hard hitter,” he said. “I think the best part of my game is that I am very cerebral and I am very aware of what's happening. This year, I can predict what is happening on the field because I have been studying a lot of film and it's helping me out.”

Woodaz is also a third baseman who has offers from Long Beach St. and USF to play baseball.