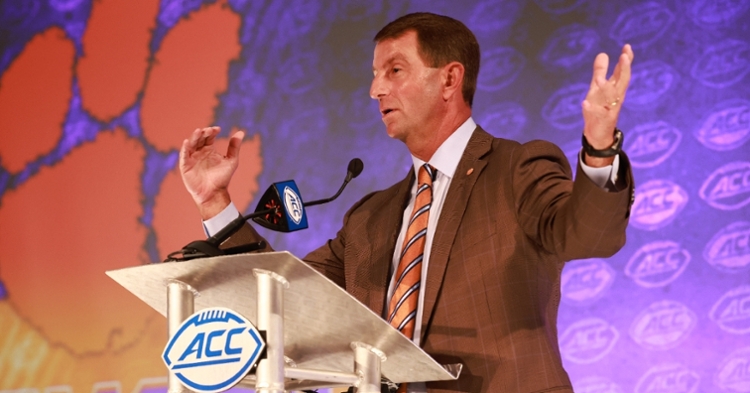 Dabo Swinney details what changes he would make if he was in charge.

Clemson head coach Dabo Swinney thinks that college football is a wild, lawless land where the money brokers rule and common sense has flown out the window.

Swinney, speaking on the show Packer and Durham with Mark Packer and Wes Durham on Wednesday, was asked what changes he would make if he were made the czar of college football.

“I would say two things: No. 1, to me, because it’s immediately on my mind and it’s incredibly frustrating to be able to bring our roster in for camp in the fall,” Swinney said. “This 110 (player limit) is ridiculous. We’re talking about your walk-ons, and they go through spring, they grind all summer, they’re paying their way and we’re talking about two weeks of camp when your team is most exposed, ever. You never have this amount of time when you’re practicing back-to-back-to-back ever. All year.

“And you need these guys, and you have to tell them to sit over there for 12 days after they trained all summer. You’re talking about the bottom part of your roster. Everybody has either 115, or 125 – it really doesn’t matter, but to not be able to bring your kids in, it drives me crazy. That would be the first thing. Like poof, done, it’d be simple.”

He would also do away with the plethora of committees that seem never to get anything done.

However, Swinney is not and will not be named the czar of college football and will continue to coach the Tigers. He says his program is in great shape despite the ever-shifting dynamics that are changing the game.

“I love that we had 109 guys go through spring and not one left. There wasn’t one guy that I was sitting around (the deadline to enter the transfer portal) that I was ‘Uh-oh, what’s going to happen?’ We have a very committed team,” Swinney said. “We have a team that has a lot of self-awareness. The 109 exit meetings I have with those guys, I think it’s a very self-aware team. Nobody that I felt we weren’t on the same page. I love that. I think we have great leadership.”

The summer will be spent getting healthier and better.

“But we’re like anybody else, we have a lot of work to do this summer. We had 21 guys out this spring,” Swinney said. “Most, all, except for two were postseason injuries, recoveries, surgeries, et cetera because it was a crazy year. Getting healthy. I think we’ve got a great football team in the making. As I tell them all the time, we’ve got the ingredients – we just have to put it all together. So it’s a big summer for everyone. This is what we call the transformation time of our year.

“If we’ll put the work in and do what it takes and come in August if the Good Lord keeps us healthy, we’ve got a chance to be a really good football team. We were a good team last year. I know 10-3 is a disappointment to a lot of people, but I was proud of that football team, of how we finished. I think we’ve got good momentum…A lot of the intangibles and the things that you can’t really measure on paper or see really at times, I think this team has deep inside it.”

Last year’s team won 10 games despite the injuries and inconsistency on offense. It was the 11th consecutive year of 10 wins or more – only Alabama and Florida State join Clemson in that feat.

“If were easy to do, there’d be a lot more people…As crazy as a year as we had, and we’re sitting there at 4-3, and they’ve got U-Haul trucks outside the Swinney house, not even Two Men and a Truck – it’s U-Haul on out of here,” Swinney said. “Maybe I’ll get an NIL deal with U-Haul. We now have the longest winning streak in the nation with six. We’ve won six in a row…That’s crazy.”