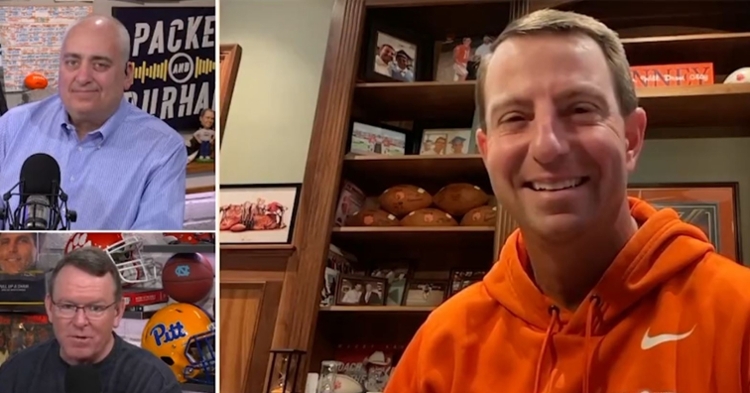 Clemson head coach Dabo Swinney says the lack of rules in college football are hurting the game he loves, but he thinks the sport’s growing pains will make it better in the long run.

Swinney, in an appearance on the ACC Network's Packer and Durham Wednesday, was asked about the current landscape of the game in which NIL (Name/Image/Likeness) and the transfer portal are the driving forces across the country.

"It’s crazy times. For me, I’ve always been about education. Education is and should be the No. 1 thing – and nobody talks about that," Swinney said. "The value of an education and all that goes into that and the long-term development of young men and preparation for life. It’s really become all about short-term, and I just think that’s not good for the game and it’s not good for the young men quite frankly. As adults, we’ve got to do a better job of helping young people. They’re 17-18-19 years old and most adults can take themselves back to those times – and there’s a lot of great changes. People write a lot of things that just aren’t true."

Swinney said that there are no rules governing the game, but he sees something positive happening at some point down the road.

"I just think we have to focus on what’s best for these young men long-term. If we keep that and we keep education – and a lot of changes are really good – one of my favorite things of this crazy time we’re in, as chaotic as it is, as uncontrolled as it is – there’s no rules," he said. "We have a terrible governance structure in college football. The experts have no voice. We really don’t. It’s one of the very few industries out there that the experts who have really spent their lives doing things really have no say. So you have a lot of people making decisions that really have no – and it’s really not their fault, their intentions are great – but they aren’t really equipped to have the perspective to understand the consequences from the decisions.

"It’s an interesting time, but I personally think it’s going to put college football in a better place. As crazy as it is, and it might take 18 months, 24 months, 36 months, but when it all settles out – and it will, there’s always growing pains with everything. There’s a lot of great things. I think the NIL is great. I know there isn’t anyone that wants to write that. I just think it’s being used in a way it’s not intended and it’s a mess in a lot of ways. The transfer portal is a great thing. But as a lot of coaches predicted, it’s a mess and it’s sad, and the kids are going to be the ones who suffer in the end."

Swinney was speaking at the ACC’s annual spring meetings at the Ritz-Carlton on Amelia Island. The league is discussing NIL and possibly doing away with divisions within the league, and Swinney said he thinks the people that run the game are aligned in making sure the sport is taken care of.

"But I think it’s going to lead us to a better place, a better structure – what’s it going to look like? We could talk about that for a long time, but in the end, I think college athletics and college football in particular will be in a better place when it’s all said and done,” Swinney said. “I’ve been coming to these meetings – I came into my first meeting 13 years ago with Bobby Bowden reading the USA TODAY. I’ve seen a lot of these meetings and I’ve seen a lot of talk and rhetoric and we solve all kinds of problems down here and nothing ever happens really.

"This is the most aligned that I’ve ever been a part of as far as the coaches, the ADs, the commissioner – as far as on the same page, aligned and really understanding what the issues are. What we think the best path is forward and quite frankly it’s probably the same in the other conferences as well. We’ll see where it goes. We’ll navigate it, and when it’s all said and done, I really think we’ll be better than it’s ever been.

"Better for the players. Better for the fans. Just a better structure overall to make an impact and positive changes. As coaches, that’s what we do. We fix problems and make decisions every single day. I think in the end, that’ll win the day."