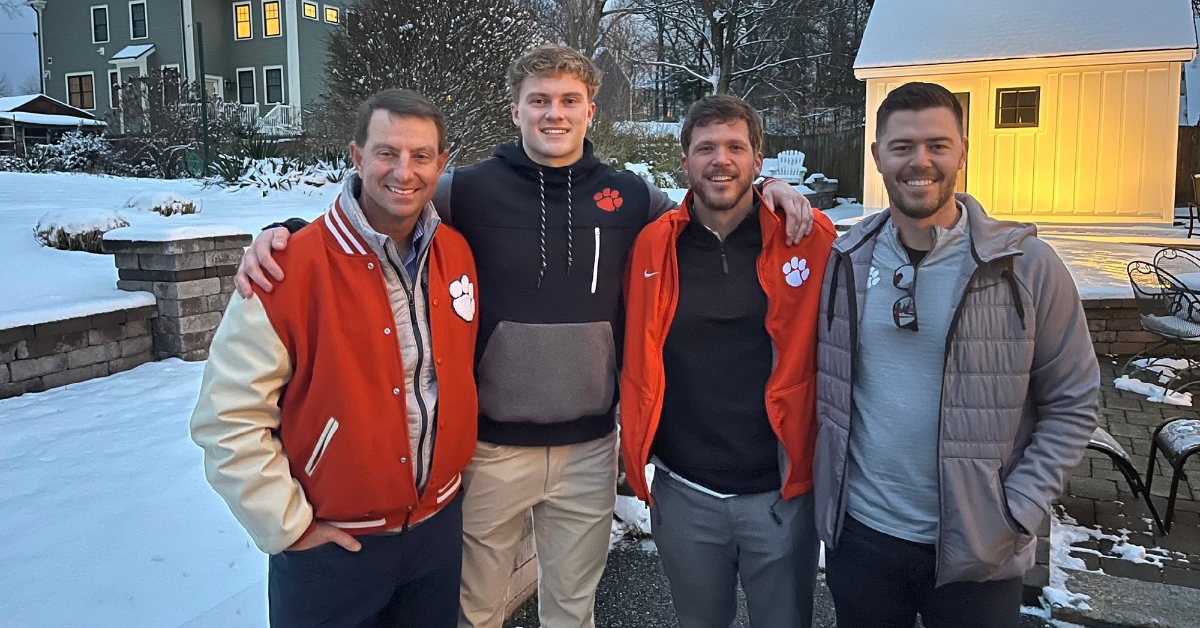 Hanafin poses with the Clemson coaches during the visit.

Clemson wide receiver signee Ronan Hanafin was excited about meeting new offensive coordinator Garrett Riley, and when Riley arrived at Hanafin’s house earlier this week, he received an icy greeting. In the way of a snowball.

Riley was hired away from TCU late last week by Clemson head coach Dabo Swinney, and he has been on the road with Swinney this week meeting Clemson prospects and signees. The duo made the trip to Boston earlier this week, along with wide receivers coach Tyler Grisham, to check in on Hanafin.

Hanafin wanted to give the coaches a proper northern greeting, but his 10-year old brother stepped in and did the honors.

“As soon as they arrived at my house we went outside to greet them and my little brother, Eli, who is 10, picked up a snowball and hummed it at me,” Hanafin told TigerNet. “Obviously, I had to throw one back and then Coach Grisham and Coach Swinney started throwing them, too. I got nailed in the head and had to whip one back. This is how us northerners greet each other.”

Once the snowball pleasantries were exchanged, Hanafin got down to the business of meeting his future coach.

“Yes. I was super excited when I heard he was coming, especially after his quick turn around,” Hanafin said. “I was excited to hear that Coach Riley was coming to the house with Coach Swinney and Coach Grisham. It was a quick turnaround for him after just arriving in Clemson, so I really appreciate the effort they all made to visit me in my hometown.”

“It was great to meet Coach Riley. He fits right in with the other coaches and culture at Clemson,” Hanafin said. “It’s clear how smart he is, but he’s also very humble.”

He started his prep career at cornerback as a freshman but played receiver and linebacker/safety most of his career, and also returned punts. He was limited by injury to only three games (and just one full game) as a senior, but posted 64 tackles, five pass breakups, two interceptions and a sack as a junior in 2021. He also contributed 30 receptions for 369 yards and four scores.

He will enroll in Clemson in June, and he said the coaches haven’t limited him to one spot.

“Coach Riley, along with coach Swinney and coach Grisham, said they love how I am a big, physical receiver that could play all over the field,” he said.

For now, however, he is enjoying some last snowy days and his final weeks of high school.

“I am just getting prepared in every way possible for when I get to Clemson,” Hanafin said.

This is how we do it in Clemson-north! Had a great night with Coach Swinney @Coach_Grisham and @CoachGRiley Started it off right with a snowball fight! @ClemsonFB pic.twitter.com/uDzpRixGUQ