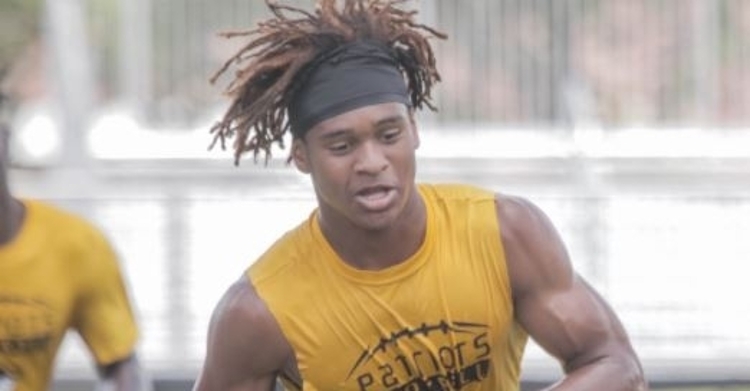 Little received a Clemson offer from Brent Venables this week.

Clemson’s most recent offer in the 2022 class comes at a time when recruits have started to schedule visits for the upcoming months. While Clemson was not originally in the plans for a visit, a phone call from Brent Venables and the defensive staff put Clemson in a position to host one of the top cornerbacks in the ’22 class.

Earl Little Jr. reported a Clemson offer on Wednesday, putting Clemson in company with close to 40 other schools who hope to land the 4-star corner. Little Jr. attends American Heritage High School in Ft. Lauderdale (FL), a school that has become notorious for producing NFL talent. The 6-0, 175-pound playmaker is currently listed as the No. 70 player overall and the No. 9 corner in the ’22 class in the 247Sports rankings.

Little Jr. has been recruited by defensive coordinator Brent Venables, and a video call on Wednesday provided Little Jr. the opportunity to meet the entire defensive staff. Little Jr. learned of the Clemson offer on that call, and it was one that he has been waiting to receive.

“Clemson has been a school that I’ve been waiting to offer for a good minute now and it finally came. I was on a FaceTime call with the whole defensive staff for about an hour and forty minutes when I got the offer, and prior to that I was on the phone with coach Venables for about 30 minutes,” Little Jr. told TigerNet. “It was pretty cool. I’ve been waiting for that offer and it finally came. Especially from a school with that pedigree. I’m very blessed to be in the position I’m in.”

Little Jr. recently released his top schools and scheduled visits before receiving the Clemson offer. With visits planned to USC, Alabama, Florida, Florida State, and LSU, Little Jr. is now considering using one of those visits to check out the Clemson campus.

“Clemson is definitely going to be a contender for me,” he said. “I’m still open with my recruitment, so they are definitely a contender. I currently have five visits lined up, but with me getting this offer, I’m leaning towards knocking one of those visits off.”

With Venables leading Little Jr.’s recruitment, the 4-star has had the chance to learn about the Clemson culture and what the Tigers have to offer. What does Little Jr. like about Clemson so far?

“Coach Venables is a straight-forward guy and very genuine. He cares a lot about his program and how he runs his defense and how they do things over there. I can see why they are successful,” Little Jr. said of his talks with Venables. “They told me everything I wanted to know with being on the phone with them for an hour and forty minutes. They told me how they would use me in their scheme and showed me around campus. I will probably get a better feel once I visit, but I like what they showed me and I like what they are saying.”

Little Jr. comes from an NFL bloodline, with his dad, Earl, having a very successful career in the NFL. Little Jr. has learned how to play DB from his dad’s teachings, and Venables likes the versatility that Little Jr. offers in the secondary.

“Coach Venables said he likes how I play with a chip on my shoulder,” he said. “He was saying that I’m a ferocious player and that I can tackle and play all 3 positions in the secondary. He said I’m like a Swiss Army knife. I can do everything and I could go where ever they needed me in the secondary. I’m versatile, and that’s what he loves the most. And I’m not afraid to tackle.”

As Little Jr. prepares to take visits and see his top schools in person, what will he be looking for in each contender?

Little Jr. released his top schools at the beginning of May, with Alabama, Florida, Florida State, LSU, Miami, and USC making the cut. After receiving the Clemson offer, Little Jr. said Clemson is now in that group. Little Jr. said that he has built very strong relationships with four of those schools, naming Nick Saban at Alabama, Corey Raymond at LSU, Marcus Woodson at Florida State, and the entire coaching staff at Florida as the coaches that have done the best job with him so far.

Little Jr. said he plans to announce his decision on National Signing Day and will play in the 2022 All-American Bowl.

Wow... After a genuine conversation with @CoachVenables and the whole entire defensive staff, I’m extremely blessed to have earned an offer from Clemson University! @CUCoachReed @ClemsonFB #Allfacts #ALLIN #blessed pic.twitter.com/gl7laraE1w