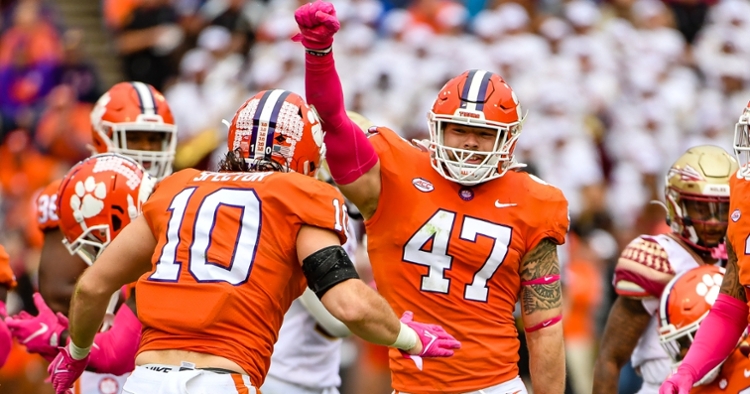 These two have made a lot of plays and look to go out on top when it comes to the rivalry Saturday.

Saturday marks the last time James Skalski and Baylon Spector line up in the same defense together against the rival South Carolina Gamecocks, with No. 47 and No. 10 respectively delivering hit after hit as the “Bruise Brothers” -- head coach Dabo Swinney's nickname for the duo.

Together the duo has combined for 443 tackles and 19 sacks in their Clemson career and also helped the Tigers to six straight ACC Championships and College Football Playoff appearances. It’s been an impressive ride for the linebackers, and before the next wave of talented recruits takes over the position, the duo has one last ride on Saturday night inside of Williams-Brice Stadium in Columbia.

“It’s probably one of the most hostile environments in college football,” Spector said of Williams-Brice. “Especially for this rivalry game. You go into looking forward to it knowing they're going to come in bringing everything they can. The fans are going to be great, they’ll be cheering, screaming, yelling. Hostile environments are good for away teams too, you go into it knowing they're bringing their best and what we have to bring."

Clemson looks to extend its winning streak over the Gamecocks to seven games, which would match the longest streak set by either team since the Tigers won seven straight back from 1934-1940. Neither of the Bruise Brothers have lost to South Carolina, and if Skalski has it his way, they won’t on Saturday either.

“It’s a big game for this state and for both teams,” said Skalski. “It’s going to be a night game so it’s going to be charged up and a great environment and I’m excited we get to play them this year. This game means a lot to a lot of people especially in the state. We’re trying to go out on the right foot and get the W.”

When asked what his favorite memory he had versus the Gamecocks, Skalski said it was a certain thumping the Tigers handed down a few years ago.

“I remember my freshman year when we beat them 56-7 here at home,” said Skalski. “That was my first one and I remember the stadium was just rocking. Mike Williams was going crazy in that game. I remember watching Ben (Boulware) and Kendall (Joseph) prepare that week, and then just dominate. You could see Ben on the field that game just calling out plays before they even happened. I remember in ‘17 when we went there and (Hunter) Renfrow had that crazy screen where he spun a couple times. That was a night game in Williams-Brice, and that was crazy. That was when they were throwing batteries and stuff at us and we ended up playing well.”

As both players suit up for the last time in the regular season for the Clemson Tigers, the Bruise Brothers will leave a lasting legacy in Tigertown, and who knows, one day we could be seeing them help Brent Venables call out the opposing teams plays from the sidelines as a coach.

"There are 106 miles to Columbia. We have a full tank of gas, half a pack of cigarettes, it’s dark and we’re wearing sunglasses, hit it!" - Skalski and Spector (probably).