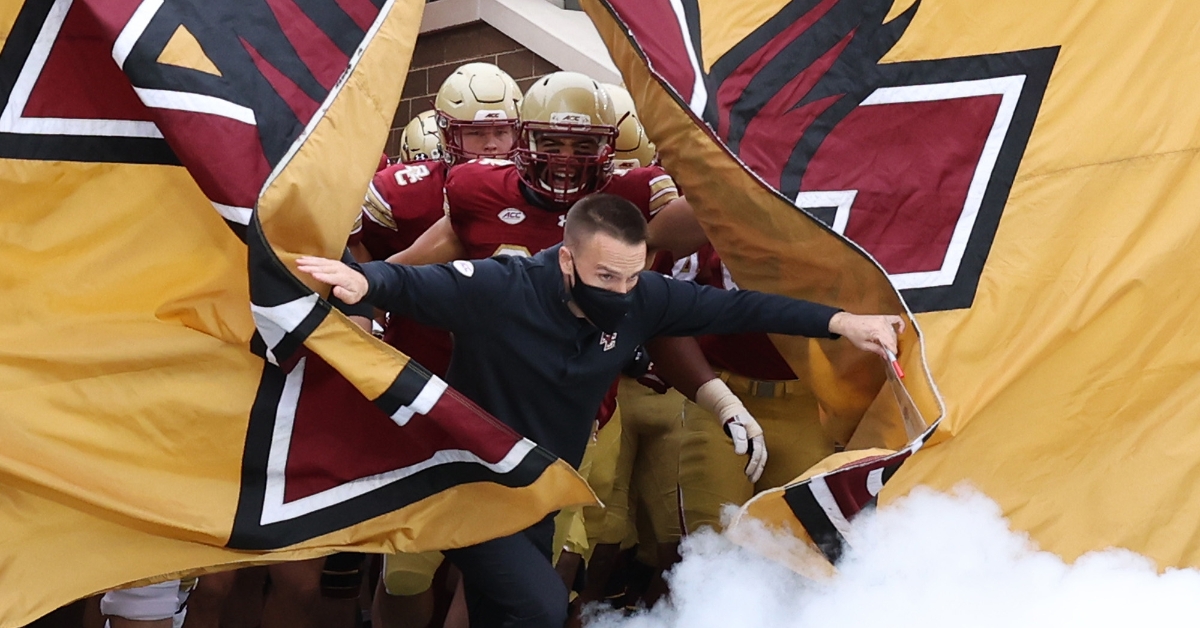 Hafley and the Eagles play at Clemson Saturday night at 7:30.

Hafley met with the media following Tuesday’s practice – a practice that saw the Eagles turn up the noise in preparation for playing in Death Valley Saturday night – and previewed his team’s matchup with the Tigers.

"I've played them twice in '19 and '20. I'm sure there are guys who have played them a lot more than me, but I've certainly played them the last two years,” Hafley said. “Have a ton of respect for them, coach [Dabo] Swinney, coach [Tony] Elliott, coach [Brent] Venables. I think it's one of the best coaching staffs in the country. Coach Swinney's been really good to me, getting to know him at the ACC meeting this year and spending time on Zoom. We've texted back and forth, I have a ton of respect for him. He does it the right way, coaches the right way, motivates the right way. Cares about the integrity of the game. Coaches fundamentals and technique. I can't say enough about the staff and what they've done.”

Halfey said that Clemson’s offense is just inches away from making big plays.

"They have a good football team and I know right now the record is not what everyone is used to seeing at Clemson, but just turn on the tape and watch them, at least from a defensive standpoint watching their offense,” Hafley said. “Guys, they're just like inches away. Five [D.J. Uiagalelei] is throwing passes that, gosh, they're just missing, they just dropped them or the back just missed the cutback. I respect the scheme, I respect the players and this will be a big test in a hostile environment. I'm pretty sure we're going to get their best on Saturday night, so we got our work cut out for us. We're excited about the opportunity and we have our work to do in practice this week."

He then said he knows Death Valley will be rocking.

"We've certainly talked about it. We know it's going to be loud. I was only there last year with half the stadium full because of COVID, so I hear it's going to be loud,” Hafley said. “We tried to simulate it in a few periods in practice, so I'm totally out of it. My ears are still ringing. Coach [Frank] Cignetti, I think he had his mix of Guns N' Roses, Pearl Jam, I felt like I was at a concert, so my head's spinning, my ears are ringing. We'll do the best we can. There's nothing we can do to totally simulate it, but we'll work on it in a couple of periods, at least."

Uiagalelei made the first start of his career against Boston College last season and went 30-of-41 for 342 yards with two touchdowns, helping erase a 28-10 deficit. Hafley said Uiagalelei is facing undeserved criticism.

“You watch the tape, he's enormous. I would expect him to run the ball against us. He has about as strong of an arm as I've ever seen,” Hafley said. “It looks like he's throwing 98 miles per hour fastballs. When he's on the run he can do it. He can do it in the pocket. Like I said, they're getting a lot of undeserved criticism because...guys, it's inches. He's a good player. They got [Justyn] Ross back, I have experience going up against him. He's a great wideout. They got 10 [Joseph Ngata], six [EJ Williams], two [Frank Ladson], I know the running back [Will Shipley] is out but 20's [Kobe Pace] a good player. They got a good O-Line. They're one of the most talented teams in America with good coaches. We look forward to the challenge."

Hafley finished by saying he looks up to Swinney.

"I kind of look up to him. As a younger coach, not saying that he's old, by any means, what he's done at Clemson and where he's taken it and the way he's built it and stayed there and the consistency, I think it's awesome,” he said. “Rather than a guy who could have probably jumped around here or there. He does it with good kids. He recruits the right way to fit his scheme. Just doesn't look at stars. He believes in fundamentals and technique. He's hired good coaches. He treats people the right way. I just appreciate it since I've joined the conference, he's been really good with me and he doesn't have to be at all, so I respect him. As I said, I look up to him. He's an awesome coach and an awesome person."