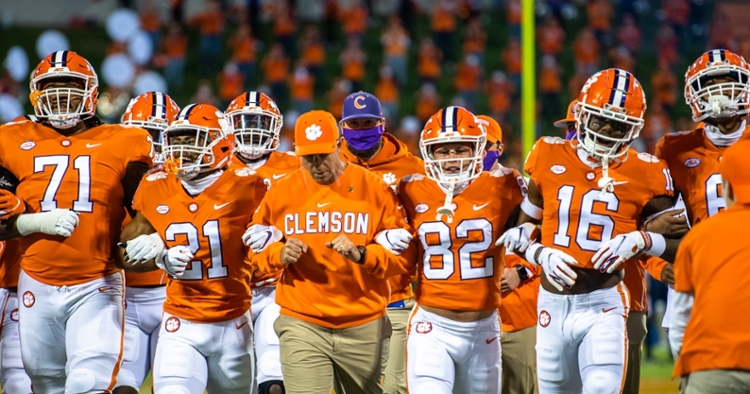 Dabo Swinney has built a culture at Clemson that is hard to replicate (ACC photo).

As LSU head coach Ed Orgeron kissed the National Championship Trophy last January and Joe Burrow smiled a million-dollar smile and Odell Beckham Jr. handed out cash like a lawyer handing out business cards at a car wreck, Clemson head coach Dabo Swinney smiled for the cameras and admitted that LSU was the better team. What he didn’t say, but maybe should have, was that it’s harder to stay on top than it is to reach the top.

Clemson has matched Alabama when it comes to consistent success on the field – both programs have been a major mainstay atop the polls and in the College Football Playoff over the last decade. Ohio State and Oklahoma are there as well, but Ohio State has just one title to show for it and Oklahoma can’t field a defense worthy of a title.

Orgeron famously sauntered into Alabama last season and knocked off Nick Saban’s troops, then dropped F-bombs in the locker room and declared that the SEC belonged to the Bayou Bengals. He was right, for a few months. Then reality set in for LSU and the program is under fire from all directions, leading many to wonder if a little voodoo and selling of a soul to the devil was involved in last season’s magical run.

There (probably) wasn’t any black magic involved, just an older quarterback finding his groove and a bunch of older players who finally found their way. But as Orgeron and his players answered questions about the game and the season, there was no looking ahead, there was no tomorrow. For Dabo Swinney, there was a lot about “tomorrow” in his postgame presser that night.

“But again, just proud of our seniors. These guys are leaving here with 55 wins, and this hurts right now, a lot of pain. I'm disappointed, hurt for all our fans. But what an incredible run. We'll get back to work. We start spring ball six weeks from Wednesday, and excited about next year's team and the challenge of going back to work and putting another team together,” Swinney said. “We'll celebrate this group. We're going to have our banquet next weekend. We'll celebrate this wonderful group of seniors the right way, and then we'll get back to work and see if we can get back here.”

Since that night, Orgeron has lost two fabulous coordinators and replaced them with what appear to be botched hires. Clemson lost co-offensive coordinator Jeff Scott and keeps on rolling. Orgeron lost his team this summer when a practice was missed due to social justice issues, while Swinney marched with his team in support.

LSU’s players began to opt out as allegations about pay-for-play and rape allegations surfaced against a former LSU running back. Several players will likely transfer this off-season, and Orgeron will be faced with another rebuild. Swinney and company will keep humming along, chasing the “why.”

“You know, for me, it started in '09 our first year, and it's being really driven by the why of our program: Why I coach, why we do what we do, not just what we do, how we do it, but why,” Swinney said. “And really everybody believing in that part of it. Being culture focused, being very intentional. For me, I recruit people first. I hire people first. There are no perfect people, but I think the good Lord has given me good instincts, and so we've had a certain way that we've gone about doing things.”

The reinforcement of that culture begins again with each new season.

“We start over every year, reinstall the program, reinstall the core values, the philosophy that we believe in, the why, and I just don't vary from that,” Swinney said. “And then as we have been able to build that culture over the many years now, we just nurture it every year. You develop young people. You develop leadership. We've had 196 seniors, 192 graduates. I think we've had 13 or 14 juniors leave early. Three of them are already back. Two of them have got their degree. is coming back this fall to finish up and work with us. It's just culture driven. That's the short answer I can give you.”

Swinney said the focus has to be on the program and the players, not just wins and losses.

“You know, the program is what I've always been focused on, not just having a good team,” he said. “From day one, we've always been program-oriented, with the goal being developing a consistent winner, to one day be a team that year in and year out you just know you've got a chance. That's all you can ask for.”

Swinney has an attitude of belief that resonates with everyone associated with the program.

"Well, I mean, the first thing is belief — I mean, an attitude of belief," Swinney said. "A can-do attitude, a can-do spirit — simple as that, you know? Not hope, but true belief because when you truly believe something, you're going to put the work into it. And then articulating the vision — having a vision for it, being able to create the buy in, getting the right people in the right places. I mean, in my role, to build a culture — to change a culture — it comes through discipline, accountability. It comes through graduation. It comes through recruiting. And so, you know, those were things. But when you take over a job, nobody came there to play for you. So you have to create the buy in.

"And that's easier said than done. So it starts with communication. For me, it was creating a family atmosphere with communication. That leads to trust and respect and making sure everybody in the whole building understands what the purpose of the program is — what's the core values, what are we all about? Like, why do we do what we do? And then just really nurturing an appreciation for everything, everybody's role. I think that's what we set out to do. And then never looking for shortcuts. You know, I think a lot of people make mistakes and they get focused on what's best for the here and what's best for this team. But don't sacrifice the program over the long haul to do that."