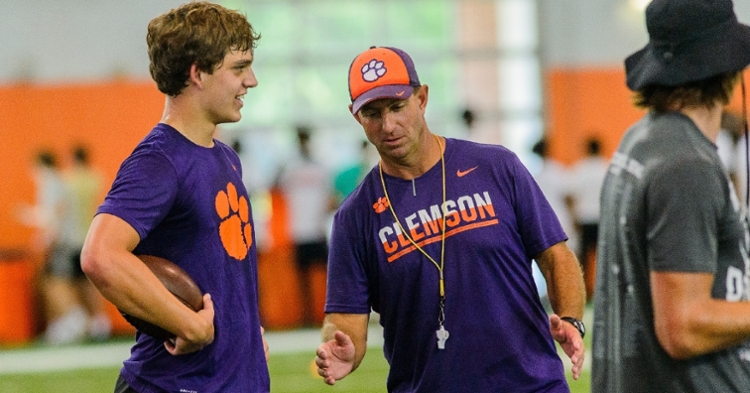 Arch was in the house for the Saturday afternoon session of Dabo Swinney’s high school camp, and he made quite an impression.

Five-star quarterback Arch Manning – grandson of Archie and son of Cooper and nephew of Peyton and Eli – worked out for the coaches during the afternoon session as his dad and mother Ellen looked on. The Mannings were given a tour by recruiting staffer Jordan Sorrells, who stayed close to the couple at all times as they watched the proceedings.

To say that there was a palpable buzz is an understatement. Parents who had kids working out at fields an entire complex away stepped through the doors to take pictures of Arch as he warmed up. Nico Iamaleava out of California and Eli Holstein, two highly-rated quarterbacks who worked out in the morning session, weren’t scheduled to throw in the afternoon session but it wasn’t long before the competitive juices started flowing and Iamaleava wanted to go out and throw just so he could show where he belonged in the pecking order.

Holstein said, “If you go throw, I will go, too,” but both decided that they had thrown enough for one day and watched. Also watching were former Clemson quarterback Tajh Boyd, and current Clemson quarterbacks DJ Uiagalelei and Hunter Helms.

One observer – a parent – tried to tell us that Manning doesn’t play in a high classification in Louisiana and wondered aloud if he was really as talented as some say or if he was simply taking advantage of the Manning name.

Trust me, the Manning quarterback genes didn’t miss a generation. Manning was accurate on the majority of his throws, threw the deep ball with ease and showed touch on the intermediate stuff. When he was throwing into the net into the endzone, he didn’t miss. Former first-round pick JP Losman – who hijacked Eli Manning’s Pro Day back in the day and turned his performance into being picked by the Buffalo Bills – was very hands-on with Manning.

Later in the session, the quarterbacks moved to the other end of the indoor facility to throw to the receivers. Five-star defensive end Matayo Uiagalelei – who is also a tight end at 6-5, 265 – moved inside and started running routes with the receivers.

Uiagalelei was coached hard – on more than one occasion – by Swinney as the rising junior tries to master the art of route running. Watching Uiagalelei run a sideline route and seeing Manning throw a laser was fun to watch. Swinney said, “good ball” on more than one occasion as Manning continued to throw darts all over the field (much like we saw with Iamaleava and Holstein earlier in the day). DJ Uiagalelei and Helms moved down to watch. One camper we noted this morning – 4-star Malachi Singleton (Georgia and Miami are among his offers – continued to stand out as he went in the same group as Manning.

Swinney ordered a corner route to the sideline – about a 35-yard throw across the field – and Manning made perhaps the best throw of the day as he dropped it in the bucket and the receiver never broke stride. As we were leaving, Manning dropped a 50-yard bomb in the bucket again, drawing oohs and aahhs from everyone in attendance.

*Greer tight end Jaleel Skinner was back for the afternoon session, and during one drill tight ends coach Tony Elliott told him, “That might work at Greer, but it won’t work at this level.” However, Skinner has been impressive, the most impressive of the tight ends working this week.

Arch Manning throws well on the move. I was pleasantly surprised at how well he's put together, and how well he throws when moving either left or right. pic.twitter.com/xyyg5np44h