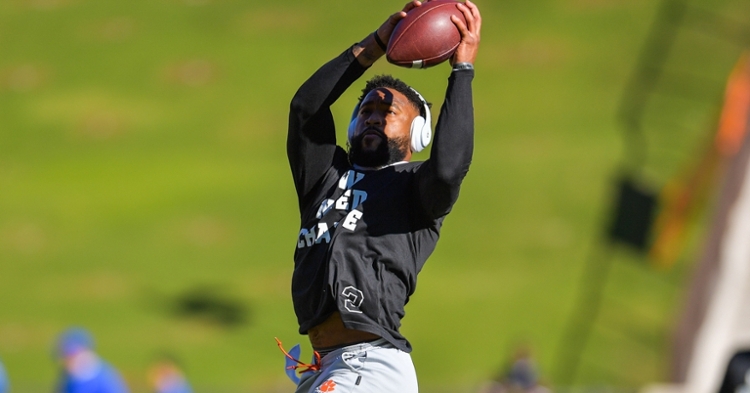 Rodgers is hopeful he gets the chance to play with Aaron Rodgers.

Amari Rodgers had a feeling that Green Bay was the place. He knew it and his family knew it, and his dreams came true Friday night when the Packers selected Rodgers in the NFL Draft’s third round with the 85th overall pick. Now Rodgers has a chance to play with future Hall of Famer Aaron Rodgers, should the latter decide to stay in Green Bay.

Rodgers (Amari) said he just had a feeling it was going to be the Packers.

"Everyone in my family was telling me, 'It was the Packers, it was the Packers,'" Rodgers said. "When it happened, it was just like crazy. It was like God was watching over me and my family and already knew where I was going. It was crazy. I'm just ready for the opportunity."

Packers GM Brian Gutekunst said Rodgers is a perfect fit and he hopes that the Green Bay fans are excited about the pick.

“I hope everybody on our team and within our building is excited about adding Amari,” Gutekunst said, via ESPN.com. “I think it was something we wanted to add — we've wanted to add for a few years — that guy that can play inside and do some returning. So yeah, I hope everybody's pleased with it.

"He fills so many holes for us. That's one of the reasons why we traded up for him, not only as a punt returner and a slot receiver, but as you guys have seen over the past couple of years the creativity that (coach) Matt (LaFleur) has within his offense, some of the jet sweeps and screens."

Rodgers is the son of current Baltimore Ravens receivers coach Tee Martin, who once coached former Green Bay receiver Randall Cobb when they both were at Kentucky. Cobb made a name for himself as the slot receiver for Aaron Rodgers and the Packers, and now Amari hopes he can fill the same role.

"He's like a big brother to me," said Rodgers. "My whole middle school career, my whole high school career, he's always been in my corner giving me tips on the game. Since Randall Cobb left, everybody in my family felt like they haven't had a slot player like him. They just felt like it was a good fit for me to go there with Aaron Rodgers, him being the prolific quarterback that he is, and with Davante (Adams), being the prolific receiver that he is, to bring me in to take a little attention off of him. I feel like that'll be perfect."

Rodgers ended his career at Clemson with 181 catches for 2,144 yards and 15 touchdowns. He also had another 529 yards returning punts, including one he returned for a touchdown.

Clemson head coach Dabo Swinney said the Packers are getting a true professional.

"This kid has handled himself like a pro since I met him, and I mean in every aspect of his life," Swinney said. "He is built like a running back, but he has the length of a 6-foot-3 wideout and plays long. He is incredibly committed to excellence in every area: academics, his relationships, how he deals with media, how he responds to adversity, you name it. He is the same guy every day. He has an incredible mind to him. He has an incredible mental toughness and grit, and then he is just highly skilled. He brings a ton of experience. He has played a ton of football. He has incredible special teams value. He can do a lot of things there.

"He played his first two years on the outside, he played his last two years in the slot. He is crafty. He is a technician at his position, and he is a guy that’s going to be ready day one since he can play multiple positions and is incredibly smart. Again, he is built like a running back, but he has the length of a 6-foot-3 wideout and plays long. He is a tough yards-after-the-catch guy and I think is one of those guys that, like I said, is a true pro and will be a leader from the moment he gets there.”

Wide receivers coach Tyler Grisham says Rodgers has it all.

“He is what you want in a player and in a person. He’s a high-effort guy who is going to lead by example,” Grisham said. “As a player, he is going to do everything you ask and more. Very versatile — can play the slot, can play outside and you can hand the ball off to him because he has such great center of gravity, contact balance and strength. He also can also take it the distance. He has great speed, great hands. He is the ultimate competitor. I could go on and on about him, but he’s the total package.”