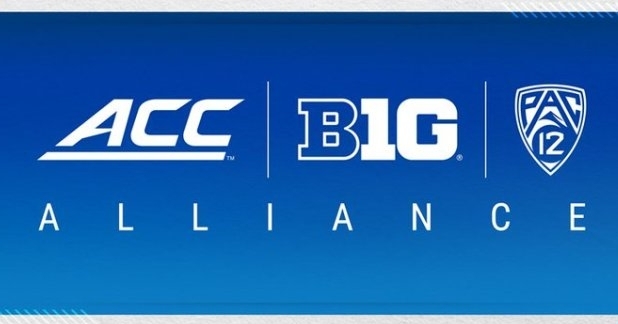 The Alliance effectively dissolved when the Big Ten took two teams from the Pac-12 last week, but the ACC and Pac-12 could be still working together.

Conferences are formulating their next move after the Big Ten made the latest in the conference realignment game last week going West to add Southern Cal and UCLA.

The ACC's answer? It could very well be another move out West.

The conference has proposed a "loose partnership" with the Pac-12, CBS Sports' Dennis Dodd reported late Tuesday, that will theoretically strengthen each other in comparison to the now 16-team arrangements each from the SEC and Big Ten.

Among the highlights is a proposed meeting of conference winners in Las Vegas.

"Sources indicate the proposal is viewed as a 'strength in numbers' move. While the 24 combined ACC and Pac-12 teams wouldn't have nearly the clout of the 32 programs combined in the SEC and Big Ten, it would be something to combat the growing financial gap between those burgeoning superconferences and everyone else," Dodd said.

Dodd also reported this week that Clemson was among an ACC trio with Florida State and Miami that could be candidates for an SEC move. There has also been buzz that the Big Ten could be eyeing the Tigers.

The report of the extra layer to the 'Alliance' between the ACC and the Pac-12 came on the same day that there was a report that the Big 12 could be targeting as many as six Pac-12 teams in a move that would likely end the league.

What appears to be holding the ACC together is a grant of rights agreement re-done in 2016, which locks in TV revenue from each conference member through 2036.