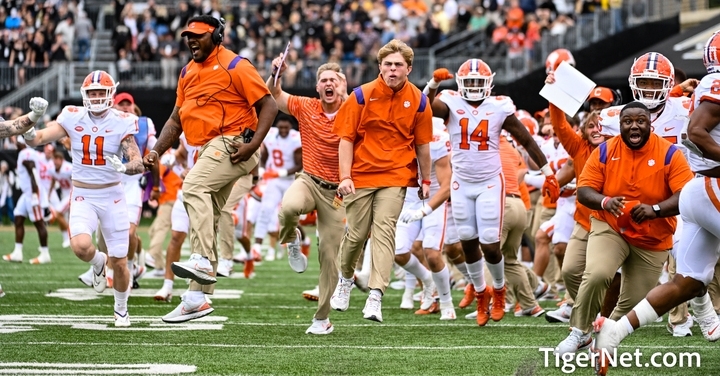 Clemson posted the 11th winning streak of 10 or more games in program history and its first since its school-record 29-game winning streak across the 2018-19 seasons.

Clemson improved to 70-17-1 all-time against Wake Forest. Wake Forest became the second opponent against which Clemson has won 70 games all-time, including its 72 all-time wins against South Carolina.

Clemson defeated an ACC Atlantic Division opponent for the 43rd time in its last 45 opportunities. Those figures include games against traditional Atlantic opponents in a divisionless season in 2020.

Clemson improved to 29-1 all-time against Wake Forest in games in which the Tigers are ranked in the AP Top 25. Clemson's only loss to Wake Forest while ranked was in 1945. Ranked Clemson teams have now won 29 consecutive games against the Demon Deacons spanning the 1948-2022 seasons.

Head Coach Dabo Swinney improved to 14-0 as a head coach against Wake Forest. Wake Forest is one of five ACC schools against which Swinney is undefeated as head coach, a list that also includes Duke (3-0), Louisville (7-0), Virginia (5-0) and Virginia Tech (6-0).

The win was Swinney’s 100th against ACC competition. He is now 93-19 against ACC teams in regular season play and 7-1 in ACC Championship Games.

Swinney improved to 33-3 all-time against teams from the state of North Carolina. The victory was his 26th win against a North Carolina-based team in his last 27 opportunities since 2012.

Clemson led 20-14 at halftime. The Tigers have now won 100 of its last 102 games, including each of their last 63, when leading at halftime.

Clemson is now 33-7 in one-possession games since 2011, the highest winning percentage in the country in one-score games in that span (82.5 percent).

Clemson trailed, 35-28, after the third quarter but engineered its first fourth-quarter comeback win since back-to-back comebacks against Florida State and Louisville a season ago.

Uiagalelei became the first Clemson quarterback to throw five touchdown passes in a game since Trevor Lawrence at Georgia Tech in 2020.

Uiagalelei improved to 15-4 as a starter, becoming the 17th Clemson player since World War II to earn at least 15 career victories as starting quarterback.

Uiagalelei engineered his fourth career fourth-quarter comeback win, tying Deshaun Watson for the second-most by a Clemson quarterback since 2000.

Uiagalelei has now thrown multiple touchdown passes in three straight games for the first time in his career.

Uiagalelei became the first Clemson player to throw for 300 or more yards, rush for 50 or more yards and throw three touchdowns in a game since Deshaun Watson accomplished the feat against Louisville on Oct. 1, 2016.

Uiagalelei produced the first game by a Clemson player with at least 370 passing yards, at least five touchdowns and no interceptions since Watson at NC State in 2015.

Uiagalelei finished with a 179.7 pass efficiency rating and has now posted three consecutive games with a passer rating of 145.0 or better for the first time in his career.

The receiving touchdown was Briningstool’s career-high second of the season and the third of his career.

Clemson opened the game with an eight-play, 88-yard touchdown drive culminating in the touchdown by Briningstool. Clemson has now scored on its opening possession in eight of its last nine games, dating to last season.

Entering the game, Clemson and Wake Forest ranked No. 2 and No. 4, respectively, in the nation in number of games scoring first. With the win, Clemson improved to 42-4 since 2018 when scoring first, while Wake Forest dropped to 5-10 when opponents score first in the same span.

Briningstool finished the game with six receptions for a career-high 72 yards, surpassing his previous career high of 56 yards against UConn last season.

Running back Will Shipley rushed 20 times for 104 yards with a touchdown. He has now rushed for 100 yards in consecutive games for the second time in his career.

Allen scored his first touchdown of the season on a five-yard pass from Uiagalelei in the third quarter. Allen added a 21-yard touchdown catch in the second overtime period.

The touchdown catches were Allen’s eighth and ninth of his career, pulling him into a tie with K.D. Dunn (nine from 1981-84) for the sixth-most by a tight end in Clemson history.

Collins became the first Clemson player to post a receiving touchdown in each of the first four games of a season since Sammy Watkins in 2011.

Wide receiver Antonio Williams made his first career start and recorded a career-long 39-yard reception from Uiagalelei on a third-down conversion in the second quarter.

Clemson concluded the first half with a 15-play, 51-yard drive that culminated in a 38-yard B.T. Potter field goal. In terms of plays run, it was Clemson’s longest drive of the season and its longest since a 16-play touchdown drive in last year’s Cheez-It Bowl.

Potter’s third field goal of the game, a career-long-tying 52-yarder, tied the game at 38 late in the fourth quarter. On the kick, Potter (60) joined Nelson Welch, Chandler Catanzaro, Obed Ariri and Chris Gardocki as the only players in school history with 60 career field goals.

Linebacker Trenton Simpson recorded his first forced fumble of the season in the first quarter.

Clemson converted 16-of-23 third downs. Clemson’s 16 third-down conversions were a school single-game record, surpassing its 15 against Western Carolina in 1983.

Clemson has now scored 35 points in four consecutive games for the first time since a seven-game streak to open the 2020 season. Clemson also reached the 30-point mark for the ninth time in a 10-game span, dating to last season.

Clemson gained 559 yards and has now gained 500 yards in back-to-back games for the first time since games against Miami (Fla.) and Georgia Tech in 2020.

Clemson played its first game without a lost turnover since Oct. 15 of last season at Syracuse.

The game included 11 combined passing touchdowns between the two teams, the most in a Clemson game in records dating back to 1950.

Wake Forest took a 21-20 lead with 12:13 remaining in the third quarter. It ended a streak of 440 minutes and 50 seconds in which Clemson had not trailed, dating to last year’s game against UConn. It had been the longest active streak in the country.