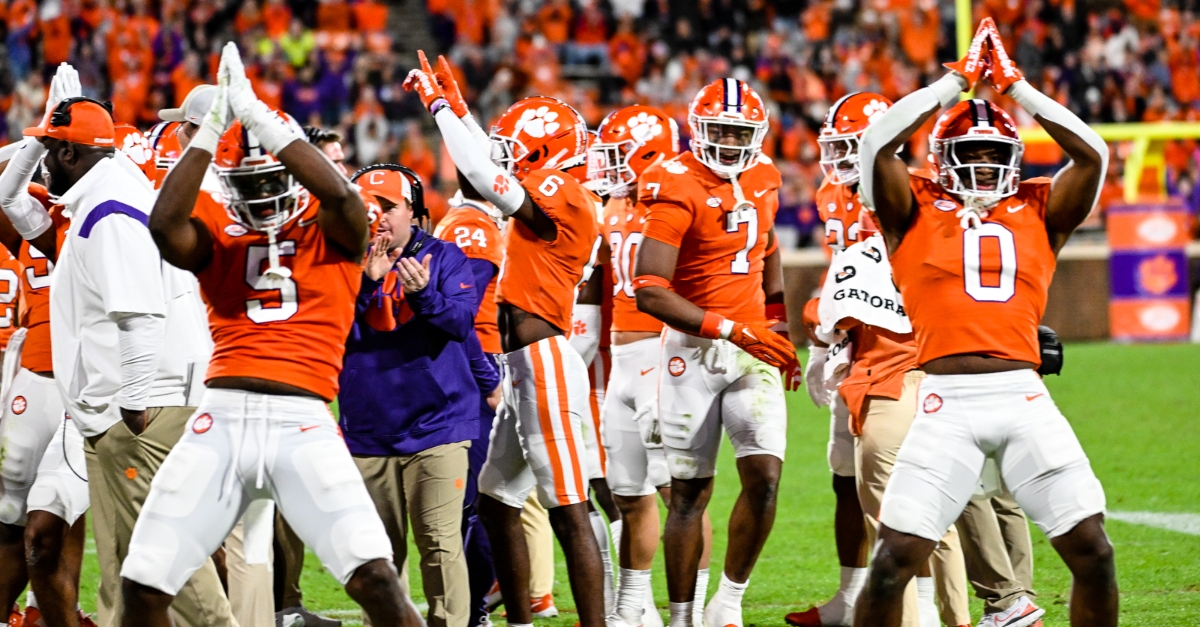 Clemson moved up one spot to No. 8.

There are two College Football Playoff rankings left and two weekends of games to go for Clemson to find its way back to the top-4.

The Tigers checked in at No. 8 Tuesday night -- moving up one spot -- in the latest installment of the rankings.

According to ESPN, no team has been ranked lower than seventh at this point in the CFP rankings and still made the final four, but there is at least one metric on the Tigers’ side.

Ahead of the Tigers, two teams are guaranteed to have at least one more loss with a battle of unbeatens with No. 3 Michigan heading to No. 2 Ohio State Saturday and then next week No. 1 Georgia taking on No. 5 LSU in Atlanta’s SEC Championship Game.

ESPN debated Tuesday night whether the Big Ten could get both Michigan and Ohio State into the Playoff and panelist Joey Galloway sees just one scenario there.

"If it's Ohio State (losing to Michigan), because they have the win over Notre Dame earlier in the season," Galloway said. "Michigan, which we have discussed, because they didn't play anybody before Big Ten play -- it's a more difficult discussion to have to include Michigan...I don't know that (Ohio State) would get in above an ACC champion Clemson, especially if Clemson goes out and makes the kind of statement we're talking about but that is the discussion. I think that is the only way you have that discussion if Ohio State is that team that doesn't win this weekend."

"Let's pretend the Wolverines win for back-to-back years for the first time in over 20 years but Ohio State loses close at home -- Ohio State still has two better wins against Penn State at 11 and Notre Dame at 15 than anything now on Clemson's resume," McElroy said. "Conference championship notwithstanding, now Ohio State would have a more impressive resume than being an ACC conference champion. I actually think if Michigan wins -- the door for Ohio State is very much wide, but if Ohio State wins, because of Michigan's non-conference (schedule), it's actually tougher for Michigan as a one-loss team having lost to Ohio State."

"You're looking at the football judgment as we're going through this. Clemson is 6-1 against teams that were .500 (or better)," the NC State athletic director Corrigan said. "Alabama is 6-2 with teams over .500 and they've got the two close losses and that (loss) against Notre Dame (for Clemson) -- that 35-14 game continues to be a part of the discussion. You look at Clemson -- defensively they've got some dudes upfront that are making plays and doing things. Overall we saw Alabama as (No.) 7 and Clemson as (No. 8)."

Clemson owns wins over No. 16 Florida State and No. 25 Louisville and is set to face No. 17 North Carolina next week from this week's CFP rankings.

"The team that ultimately should be the most frustrated is Clemson," said McElroy. "It's not their fault that North Carolina lost (to Georgia Tech). If you look at the rest of the ACC, they've done what they needed to do. They sit there with one loss -- that one loss is hideous, don't get me wrong, but Oregon also has a hideous as well. And I think Clemson right now, to be in the position that they're in -- they haven't been benefited by the rest of the ACC to prop them up and that hurts to get back within striking distance of those top-4."

The Tigers checked in at No. 7 in this week’s Associated Press top-25 and No. 8 in the Coaches Poll