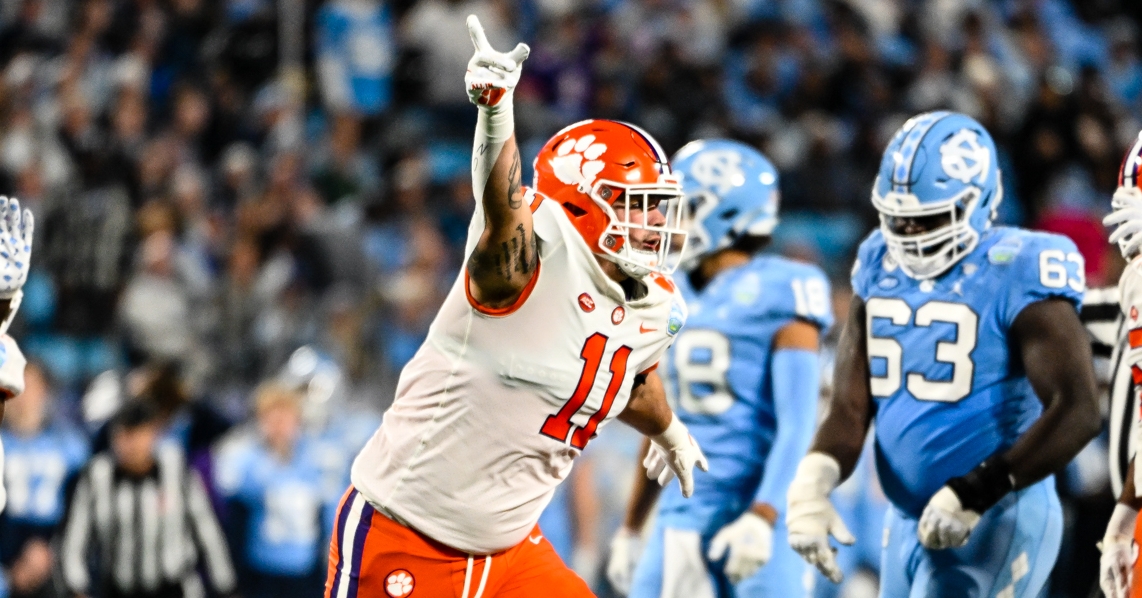 Clemson is heading for an all-orange Orange Bowl meeting with Tennessee.

Clemson (11-2) clinched its spot in the New Year’s Six contest with an ACC Championship Game win over North Carolina Saturday, while at-large selection and No. 6-ranked Tennessee (10-2) saw its Playoff hopes fade late with a key injury and a loss at South Carolina. The game is set for an 8 p.m. ESPN broadcast at Hard Rock Stadium in Miami Gardens, Florida.

The Tigers and Volunteers are meeting for the first time since the 2003 season’s Peach Bowl, a 27-14 upset win for Clemson. That ended a seven-game run in the series for Tennessee, which were all played in Knoxville, Tennessee, from 1920-76. The teams first met in 1901, a 6-6 tie in Knoxville and Clemson started the series 3-0-2 before the Vols won 11 of the next 13 (10 of 13 played in Knoxville).

A prolific Vols offense this season was led by Hendon Hooker, who suffered a torn ACL late in the season. He ranked No. 2 in ESPN’s QBR stat this season. In a first and only full game without Hooker, Tennessee put up 513 total yards (362 rushing/151 passing) in a 56-0 win at Vanderbilt.

Tennessee offensive coordinator Alex Golesh is taking over the USF program and is not expected to coach in the bowl.

Clemson is seeking a sixth season with at least 12 wins in the last eight years.

Fans are encouraged to bookmark ClemsonTigers.com/Bowl for information on tickets, merchandise and more. Fans wishing to learn more about official Clemson travel options for the postseason are encouraged to visit ClemsonSportsTravel.com or call 877-373-5060. Fans can also visit the Clemson Tigers Store at ClemsonTigers.com to purchase official Clemson merchandise for bowl season and for the holiday season.

Clemson, champion of the ACC for the seventh time in eight years, will make its seventh all-time Orange Bowl appearance and its first since appearing the College Football Playoff Semifinal at the Orange Bowl in 2015. The Tigers are 4-2 all-time in the Orange Bowl.

Clemson made its first Orange Bowl appearance on New Year’s Day in 1951, culminating an undefeated 9-0-1 season with a 15-14 win against Miami (Fla.) thanks to Sterling Smith’s go-ahead safety late in the contest. The Tigers returned six years later, a 27-21 defeat by Colorado to conclude a 7-2-2 ACC title-winning season. Clemson later secured its first national championship at the Orange Bowl on Jan. 1, 1982, when top-ranked Clemson downed Nebraska, 22-15, to finish a 12-0 season.

The Tigers have since made three Orange Bowl appearances under Head Coach Dabo Swinney. Clemson collected an Orange Bowl berth against West Virginia in 2011 after earning Clemson’s first ACC championship in 20 years. The Tigers then earned Orange Bowl victories during the 2013 and 2015 seasons, including a 40-35 win against Ohio State to end the 2013 season and a 37-17 win against Oklahoma in 2015 to earn the program’s first berth in the College Football Playoff National Championship Game.

The game will be the 20th all-time meeting between Clemson and Tennessee. Though the teams met 16 times from 1901-44, including 10 times in a 16-season span from 1901-16, this year’s postseason contest will be only the fourth meeting between the Tigers and Volunteers since Clemson joined the ACC as a charter member in 1953.

Clemson won the only postseason contest between the two teams in the programs’ most recent meeting, a 27-14 Clemson victory in the Peach Bowl to end the 2003 season. Clemson entered that contest unranked after a 5-4 start to the season but finished the year 9-4 including the 13-point win against sixth-ranked Tennessee. The game marked Swinney’s first bowl game as an assistant at Clemson, as he was in his first season as the team’s wide receivers coach under Head Coach Tommy Bowden.

The bowl berth extends Clemson’s school-record bowl streak to 18 years, the longest streak in the ACC and the fifth-longest streak in the country. Clemson's 18-year streak dates to its Champs Sports Bowl win against Colorado to close the 2005 season. Though Clemson did not make a bowl appearance in 2004, Clemson has been bowl eligible in 24 consecutive seasons, dating to a 1999 appearance in the Peach Bowl.

Clemson is 11-7 in bowl games under Swinney. With a win this year, Swinney can set an ACC record for career bowl victories as head coach of an ACC program, passing Bobby Bowden’s 11 bowl wins during Florida State’s ACC membership.

As the @ACCFootball representative, Clemson will be the home team and Tennessee will be the visitor.