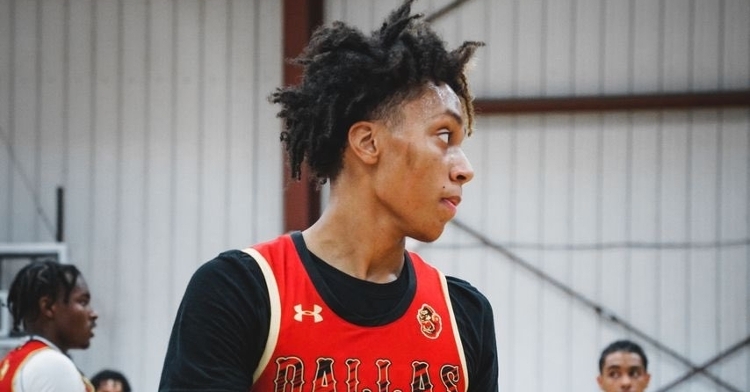 Gibson committed to the Tigers this past weekend.

Clemson head coach Brad Brownell began practice for the 2021-22 season with some good news, the commitment of Chauncey Gibson.

Gibson (6-6, 180) is a 3-star shooting guard out of Dallas (TX) Kimball who chose the Tigers over SMU and ODU. He made an official visit to Clemson this past weekend and committed to Brownell and staff while on the visit. He made official visits to the other two schools in September.

“Their coaching staff is a great coaching staff,” Gibson said last week. “They keep in touch with me. We’ve built a great relationship. They visit me at practice, and they say they like what they see. I talked to the head coach, and we had a great talk. He got to know me and know about my family, and where do I see myself in the next couple of years.”

Gibson averaged 18 points per game last season, 23 points per game in the playoffs. He said his ability to play multiple positions is one of his strengths and one of the things that attracted Brownell to him.

“With me being a 6-6 guard and being able to shoot the ball, they like my playmaking skills, and my athleticism,” Gibson said. “They see me playing in their offense as an all-around player, a scorer and facilitator.”

Gibson was also attracted to Clemson because of the ACC. He’s looking forward to the challenge of playing in the nation’s top basketball league.

“Most people say it’s a challenge, and it’s going to be a challenge, but they put their clothes on the same way I put my clothes on,” Gibson said last week. “It’s nothing big, not a big deal. They might be a little stronger and faster, but that’s stuff I’ve got to work on. It’s not like I can’t handle it, it’s basically a task that’s got to get done.”

Gibson gives Brownell a pair of Chaunceys in his commitment class. Last month the Tigers landed a commitment from 6-9 Chauncey Wiggins of Georgia.