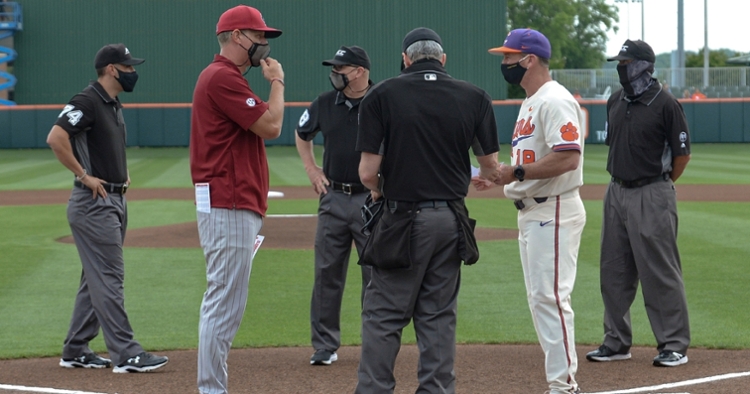 CLEMSON – The Clemson baseball team needed something good to happen Tuesday night, with the Tigers hoping to gain some momentum heading into the final six games of the regular season. The ball finally bounced their way, and the Tigers claimed a 7-2 victory over arch-rival South Carolina at Doug Kingsmore Stadium.

Clemson improves to 23-21 overall and breaks a three-game losing streak. South Carolina falls to 28-18 overall but wins the season series against the Tigers after taking the first two games of the series in walk-off fashion two months ago.

The last time Clemson and South Carolina played a regular-season midweek game was Tuesday, March 8, 2011, at Greenville, S.C. Clemson now has a 54-29 record against the Gamecocks at Doug Kingsmore, and the Tigers have a 183-142-2 overall record in the series.

The game was the last non-conference game of the season for the Tigers, as Clemson plays three games at Florida State this weekend and then returns home to close out the regular season with a three-game series against Duke.

“This certainly helps in a lot of different ways,” head coach Monte Lee said. “We are fighting like crazy to get into the postseason. A win like this tonight certainly helps our case. We know we still have work to do.

“We have to go down to Tallahassee and play a really good Florida State club on the road which is always a challenge. Then we got Duke coming at home. Every game right now is, quite honestly, like a playoff game for us. We are fighting every game to put ourselves in position to get into the postseason. We certainly took a step in the right direction tonight, but we still have work to do. But it was great to get a win tonight at home against our rival school and play good baseball."

Both teams struggled offensively early, with the Gamecocks leaving seven runners on base against Clemson starter Carter Raffield through the first three innings.

The Gamecocks broke through against reliever Rob Hughes when Wes Clarke homered to right-center on a 2-1 pitch to make it 1-0. The homer was the 19th of the season for Clarke.

Clemson was held without a hit until the bottom of the fifth and used one hit to score three runs. The inning started with a Max Wagner walk on a 3-2 pitch. On a 1-0 pitch, centerfielder Bryce Teodosio tried to bunt but was instead hit in the face with a pitch from Gamecock pitcher Daniel Lloyd. Teodosio, bleeding from the face, was replaced by JD Brock at first.

That brought up Sam Hall, whose bunt was fielded cleanly by Lloyd, but Lloyd threw the ball past the third baseman and down the left-field line. That error allowed both Wagner and Brock to score to make it 2-1 Tigers. Hall reached second on the play, moved to third on a groundout by Kier Meredith, and then scored on James Parker’s sharp single to left. Through five, the Tigers led 3-1.

The Tigers added another run in the bottom of the sixth. Bryar Hawkins singled up the middle with one out and moved to third on Wagner’s double down the left-field line. Brock then hit a soft liner down to third, and once the ball was fielded the third baseman had no play, allowing Hawkins to score for a 4-1 lead.

Jeff Heinrich homered to deep left with one out in the top of the eighth, trimming the Tiger lead to just two at 4-2. Brennan Milone followed that up with a double to left-center, but Nick Hoffman got a strikeout and pop fly to end the threat with the Tigers ahead 4-2.

Dylan Brewer led off the bottom of the eighth with a blast to right-center, launching the first pitch he saw from Parker Coyne off the roof of the batting practice building for a 5-2 lead. The homer was Brewer’s ninth of the season.

The Tigers didn't stop with Brewer's homer. Hawkins and Wagner each walked to reach base, but the Gamecocks then recorded two outs via strikeout. Meredith then lined a single to right that scored Wagner for a 6-2 lead. Meredith broke for second and the throw sailed into center field, allowing Wagner to score for the 7-2 advantage.

PJ Labriola pitched 2/3 of an inning in picking up his first win of the season. Hoffman picked up his fourth save of the year.

Took the lead in the fifth inning & never gave it back. ?? ?? pic.twitter.com/LkqQfVL5sf