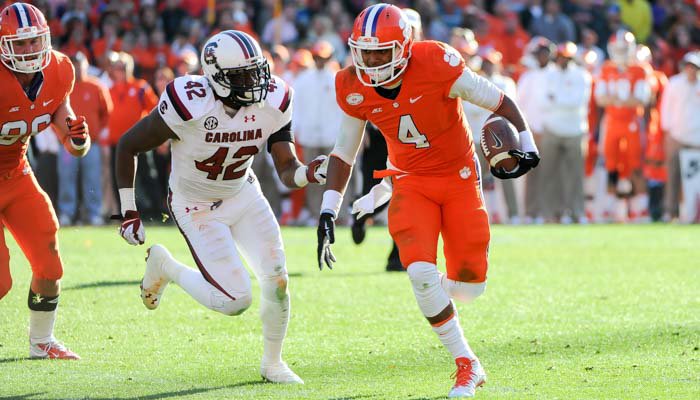 Who Would You Rather Have?

I was at dinner Saturday night and brought up an interesting conversation among some Clemson fans.

I asked the question, who is the greatest college quarterback in the history of the game? Responses included Tim Tebow, Joe Montana, Vince Young, Cam Newton and several others.

Deshaun Watson
So. Quarterback
#4 6-2, 205
Gainesville, GA
View Full Profile as the starting quarterback at Clemson over the next three years?

Now the conversation would not be interesting if you try to answer with the questions about Watson's three injuries. Obviously if he is hurt then there is no debate.

No one knows if he stays two or three more years, so its hard to frame arguments for or against guys based on how many years they actually played.

The question is also not centered on if Watson is the greatest quarterback in college football history. No one would ever make that argument.

What the real topic comes down to is from what we have seen who would you rather have at quarterback at Clemson over the next three seasons.

The only guys I would put in the mix would be Cam Newton, Marcus Mariotta, Jameis Winston and Johnny Manziel. Due to character, Mariotta is the only player who could stand up in that conversation.

The real topic also comes down to what Watson has shown us. Obviously it is a very small sample size. However, I was there when he ripped the 30-yard touchdown pass to Charone Peake

I was there when if it not for a fumble by a running back or a bad snap by the center or two missed short field goals he beats top-ranked FSU in Tallahassee.

I was there to see him in his first college start where he gutted North Carolina for 435 yards and six touchdowns.

I was there to see him hurdle the defensive back in route to a 41-0 win over an NC State team that almost upset FSU the week before.

I was there to see his four touchdown performance on one ACL in beating the arch rival by 18 points.

It may sound crazy because the sample size is so small. But in evaluating his skill set, how does it compare to the greats of the game?

Also how does his skill set match this offense. I think he is a better passer than Newton, Mariotta, Tebow and Vince Young. Those guys could not take advantage of Mike Williams

And even if you could name ten players that you would rather have, isn't a compliment to Watson that its such a limited field. Look at the names that were even brought up.

Deshaun Watson is not the greatest quarterback to ever play the game, but I don't know of anyone I would rather have over the next three years at Clemson.