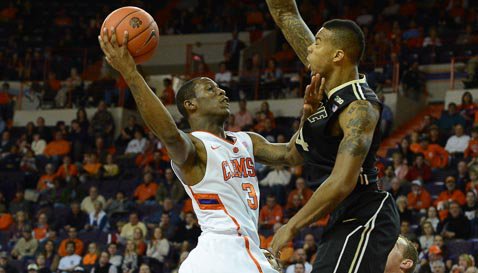 Tonight Clemson will embark upon another huge, must win game. This time it is against Wake Forest in Winston Salem.

Clemson comes into tonight's contest with a 17-9 record overall and an 8-6 mark in the ACC. The Tigers are looking to extend their two game winning streak and make history. A Clemson win tonight would mark the fifth conference road win which would tie the school record.

Wake Forest enters tonight's game struggling. In fact, the Demon Deacons are on a seven game losing streak. During that streak Wake Forest has lost to Syracuse, Georgia Tech, Duke, NC State, Florida State, Maryland and North Carolina. Only two of the seven losses have been by single digits. Saturday night North Carolina destroyed Wake Forest 105-72. In that game, the Tar Heels scored 50 points in both halves. Wake Forest has not won since January 25 when it defeated Notre Dame.

Clemson is trying to get to 9-6 and stay in the discussion for an NCAA tournament bid. If the Tigers can get a win tonight it would set up a terrific opportunity to close out the season with three straight meaningful home games. Some think Clemson will need to go 3-1 in the final four regular season games to get into the conversation for an NCAA tournament bid. An 11-7 ACC record would give Clemson a chance but the RPI is a factor against the Tigers. Others think the Tigers need to go 4-0 over the next two weeks to get into the Big Dance.

The Tigers could improve their RPI with a 4-0 finish. Tonight's opponent Wake Forest is ranked 104 in the RPI. Maryland is 71, Miami is 121 and Pittsburgh is 41. Clemson's competition in the ACC for a NCAA bid may be Florida State who is 55th in the RPI and NC State which is 54th. Clemson would also go 8-4 in its last 12 games if it wins out.

Another seed may be more important to Clemson at this point. The Tigers are currently tied for fifth in the conference with Pittsburgh at 8-6. Here is another look at the remaining schedules of the contenders for the fifth spot in the conference:

That is a lot of information about a lot of rankings, records and schedules but most of that means nothing if Clemson cannot win on the road tonight. Therefore tonight is another huge game for this program.