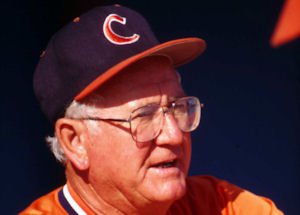 Friday was a great day for Clemson.

Friday gave us the news that Bill Wilhelm and Danny Ford were going to be inducted into the Clemson Ring of Honor.

I will spare you the details of each of these gentlemen's success in this blog. Instead I wanted to share my thoughts on the news and how these two men were different and how they were similar.

Both were extremely intelligent men who were master psychologist.

Coach Ford often times tried to play the "awe shucks" card trying portray himself as just a good ole boy from Gadsden, AL. He never came across as an intellect but don't let him fool you. There are few I have met in my lifetime with Ford's ability to read people. He had a way to motivate people in different ways. He could make the poorest of men feel like a billionaire. He could make the common man feel like a king. But he had a way of humbling those that needed it as well.

Coach Wilhelm was also very intelligent and I was reminded of that often times with his vocabulary. Wilhelm had the best vocabulary of any coach I have ever been around. Often times he would purposely use big words in a crucial situation to his team because he knew many of the players would go home and look up the word.

These two men had different styles of coaching as well. Ford worked his team to death. He would have his team out work the opponent. His players felt practices were tougher than games. If you survived Tuesday's practice and the guy in front of you all day, then Saturday was a breeze.

Wilhelm took a different approach. He treated his players like they were men. He rarely spoke down to them. He did not baby sit his guys. Instead he let them be who they were. Wilhelm knew many of his guys would drink alcohol and stay out late like most college kids but he held them responsible when it affected them on the field or in the classroom.

They were alike in that they both bucked authority at times. Ford didn't like the administration interfering with his program. Wilhelm always felt baseball could have used more support from the administration.

Neither men cared for personal recognition. Ford always gave his assistants credit for game plans, He gave his players credit as well.

Wilhelm thought personal awards were useless. He said coaches shouldn't get credit because players win games. Wilhelm made it clear that he never wanted the field named after him. He never wanted to be in the Hall of Fame and would be the only one not happy with Friday's news.

Both left behind tremendous influences on their former players. Both had players furious with them at times when they played but only a few former players don't understand their lessons to this today.

Their retirements were different. Coach Wilhelm loved the golf course and his group of friends he competed against a few days a week. Coach Ford is still very busy on his farm and keeps him as busy as ever.

Finally both men left coaching at Clemson too soon for many of us. I always felt like both coaches left great teams for the next coaches.

They left in different ways but I would have loved to see what they could have done if they coached at Clemson a few more seasons.

So Friday was a great day in Clemson. The Ring of Honors for each sport is much closer to being complete with their additions. Clemson is a better place because of these two legends and I couldn't imagine Clemson without these two great ones.

Now we need to get to work on getting Bob Pollock his recognition.