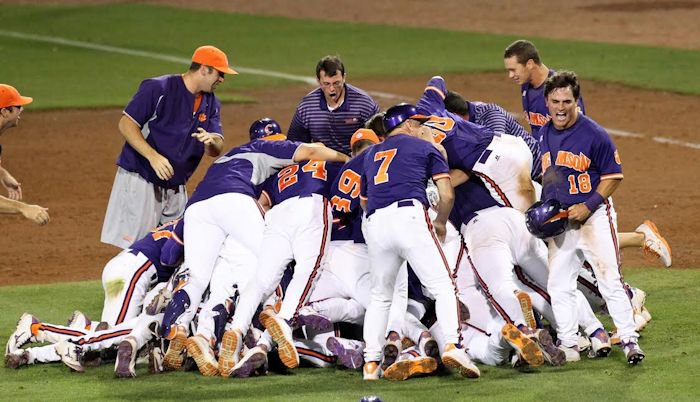 I know I am hard on Clemson baseball. I judge it differently than almost any sport at Clemson. I respect what Bill Wilhelm and Jack Leggett

Maybe it is time to lower my standards for what I expect from Clemson baseball.

This is a program that has not hosted a super regional and a regional in the same year in over eight years.

This is a program that has won one ACC Tournament championship in the last 19 years.

In the last eight years Clemson has hosted only two regionals.

Maybe I expect too much.

When Rick Pitino took over the Boston Celtics in an attempt to rebuild a dynasty he told his guys, "Larry Bird is not about to come walking through that door."

Sports change. The Los Angeles Lakers haven't won a world title since 2010. The Boston Celtics have won one world title since1986. Maybe it's time for Laker fans to realize the Clippers are 25 games ahead of them in the standings. Th Celtics are 10 games behind a team that has Barney the dinosaur as a mascot. Maybe e Celtic fans need to look in the mirror too.

Well maybe its time to realize that Kris Benson, Billy Koch and Ken Vining are not walking through that door for Clemson baseball.

Maybe Vanderbilt, Virginia, South Carolina and North Carolina have surpassed us and the gap is widening to the point where we have to accept it.

Maybe our facilities really do suck compared to the rest of the country.

Maybe the scholarship issue is too much to overcome.

Each year there are 16 regionals. Maybe its too much to ask to host a regional each year.

We put "Omaha" on the back of the hats but have only been there once in the last eight years. Maybe its time we put "Super Regionals" on the hats instead. Or better yet, maybe don't put anything on the hat.

The thought of lowering the standard seemed like a disgusting topic just a few short years ago. But, maybe the game has changed so much that simply beating Winthrop, Coastal Carolina, Michigan State and West Virginia should be the goal.

Dabo Swinney
Head Coach
View Full Profile says the fun is in the winning. Clemson baseball used to be fun. Going to Omaha as one of my favorites was fun. Hosting Super Regionals were among my favorite sporting events here at Clemson. I used to love going to Greenville to watch the Tigers win ACC titles.

Maybe the definition of fun needs to change when it comes to Clemson baseball.

Drew Moyer
So. RH Pitcher
#20 6-3, 215
Gilbert, SC
View Full Profile , and our great country and the men and women in uniform that protect and serve it every day, plus their families.