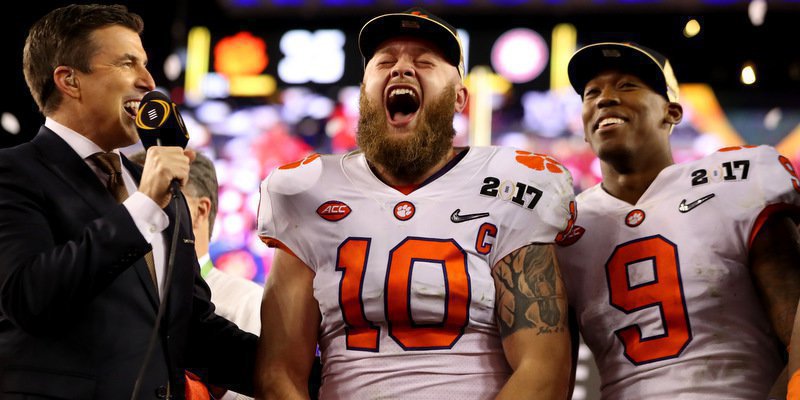 I think the euphoria of the national title and beating Alabama still has Clemson people buzzing, but I heard and saw a couple of things yesterday that made me think a little.

On Roy Philpott's show, Roy and his producer Ben Milstead made an interesting observation that because of the national title that no one even brings up the 56-7 stomping of the arch rival. In a way it was a great diversion for the Gamecocks who don't have to hear about that beating as much.

Also, I saw a video about the last five games and the titles won in each, and I hope we still appreciate those wins as well.

My point is that beating Bama and winning the national title is an amazing accomplishment, but I think the other four wins to end the season validates how special the entire season was.

Winning the Atlantic Division at Wake Forest was not as impressive, but without that win Clemson doesn't make the ACC title game.

In the regular season finale beating the Gamecocks 56-7 is special but shouldn't the national title make that win even more special?

The same can be said for the ACC title when Clemson beat a very good Virginia Tech team in Orlando.

But perhaps my strongest point is the Bama win made some of us seem to forget how impressive Clemson was in destroying Urban Meyer and Ohio State 31-0 in the Fiesta Bowl. If anything, I want to remember the playoff wins over the two power coaches in the sport and how Clemson outscored Meyer and Nick Saban 66-31.

It seems like a lifetime ago, but this season had a plethora of remarkable moments that I want to cherish forever. Beating Auburn in Auburn for the first time in over 100 years was nice.

The fourth quarter comeback against Lamar Jackson and the third-ranked Louisville squad was the loudest football game I have attended, and that memory will stay with me for a lifetime.

The Tigers overcame an eight-point deficit in the fourth quarter against Florida State to beat the Seminoles in Tallahassee for the first time in over a decade, but that seems like it happened years ago.

Like Dabo said in Death Valley this past weekend, I enjoyed the journey. It was nice destroying Georgia Tech in Atlanta and putting those demons to bed. The overtime win against NC State made my heart skip a beat or two, but it was worth it. I will also remember my best trip to Boston and the easy win in Chestnut Hill.

The point is that the Alabama win was the best in school history, but so was this entire season. We have a lot of brilliant images to take from this 2016 championship season and memories that should last a lifetime.