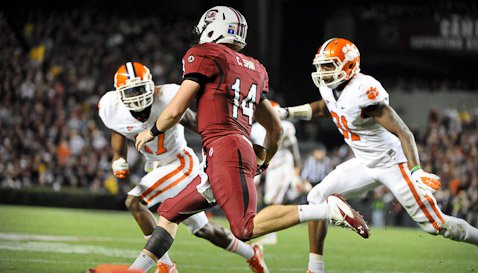 South Carolina enters Saturday night's game against its arch rival with one of the best offenses in school history.  The Gamecocks feature a massive offensive line, a tough senior quarterback, one of the best backs in the country and a dangerous corps of wide receivers.

Connor Shaw is one of the most underrated signal callers in the country.  The Georgia native combines toughness with good feet and an accurate arm.

Shaw's biggest attributes are his mental and physical toughness.  Time and time again Shaw gets banged up and gets back up and leads his team down the field.  He is a talented runner that killed Clemson in 2011 when he escaped the pocket.  This season his passing accuracy has improved.  This season Shaw is 144 of 233 for 1,983 yards, with 20 touchdowns and only one interception.

Dylan Thompson is a gifted back-up that beat Clemson in Death Valley last season.  This season Thompson is 52 of 89 for 783 yards with four touchdowns and three interceptions.  He is more of a pocket passer than Shaw but also can move around in the running game.

Mike Davis has had a terrific sophomore season.  He has 179 carries for 1,112 yards and 10 rushing touchdowns.  Davis is a hard runner that is averaging 6.2 yards per carry.  He also catches the ball out of the backfield well.  This season he has 30 receptions for 332 yards.

Shon Carson and Brandon Wilds are Davis' backups.  Wilds has missed much of this season with an injury but has 37 carries for 202 yards and three touchdowns.  Carson has 58 carries for 254 yards and a score.

At tight end, Busta Anderson has 17 catches for 275 yards and Jarrell Adams has 10 receptions for 170 yards and a score.