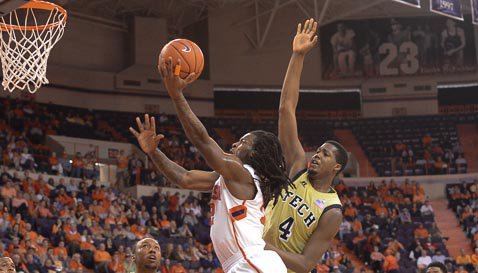 There are a lot of questions that have to be answered. Where would you build it? How much would it cost? How would we pay for it? Would ticket prices go up? How many seats would it hold? How much revenue could be generated with signage and luxury boxes? How long would it take to build? How would this affect parking weekdays? How would it affect parking on football Saturdays?

If they decided to go ahead with the planned practice facility other questions arise. How much will it cost? What could you do to improve Littlejohn?

I raised the question to our listeners on my radio show this morning. I wanted to know what Clemson people thought. It should be of no surprise that the callers who chimed in were split. Some thought they should build a new arena. Others felt nothing was wrong with Littlejohn.

I usually don't sit on the fence but I am not sure about this subject. I like the idea of a new arena with a new feel. It would give the basketball program a fresh start.

On the other hand, I am concerned about the cost and I understand that a new arena does not necessarily mean better results.

The best arena in the ACC is John Paul Jones Arena is Charlottesville. Every coach and every member of the media I have talked to said this is the best in the league. It was built in 2006 for $131 million (or $151 million in 2013 dollars). The arena holds 14,593. This is a palace but has it really helped Virginia basketball? Here is the Cavs records since moving into JPJ Arena:

In the seven plus years in the nicest arena in the ACC Virginia has gone 116-91. In the ACC they are 11 games under .500. UVA has two NCAA tournament bids in those seven years.

Maybe it would be more fair to compare UVA basketball before and after, but is 46-57 in the ACC worth $131 million?

The nicest arena in our state is the Colonial Life Arena in Columbia. South Carolina built the 18,000 seat arena in 2002 for $65 million (or $84 million in 2013). Here is how the Gamecocks have done since moving into their new building:

So the Gamecocks spent $65 million and went 60-107 in the SEC with one NCAA tournament appearance 10 years ago. Was one winning season in the SEC over the last 11 years worth it?

Maybe these are two bad examples. There are other examples of great arenas and great programs. However, there are examples of arenas worse than Littlejohn with better seasons.

Many say that Florida State has the worst coliseum in the ACC but the Seminoles won the ACC tournament last season. Miami is one of the worst arenas in the league but the Canes are 7-0 and atop the ACC this season.

The point is that great buildings don't always equal success and poor ones don't mean failure.

However, it would be nice to come to a new arena and build a new tradition of Clemson basketball.

In either case, this is a long and complicated decision. It is also one that Radakovich just went through at Georgia Tech, so I am more comfortable knowing he has recent experience in this type of decision.